A lost fisherman who drifted at sea for 15 weeks, sleeping next to his dead brother-in-law, was eventually helped to safety by a shark. Toakai Teitoi was stuck on a 15ft wooden boat for more than 100 days after he ran out of fuel and the vessel drifted deep into the Pacific. The 41-year-old Kiribati policeman relived his harrowing voyage after a fishing boat eventually picked him up and took him to Majuro in the Marshall Islands. The father-of-six told of sleeping with the body of his brother-in-law who died during the ordeal, suffering severe dehydration. And he said it was only after the intervention of a circling shark that he was eventually rescued. 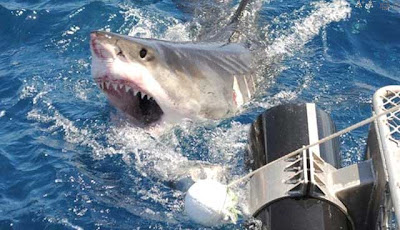 Mr Teitoi's ordeal began on May 27 after he had flown from his home island of Maiana to the Kiribati capital of Tarawa to be sworn in as a policeman. Instead of flying home he decided to join his brother-in-law Lelu Falaile, 52, on what was supposed to be a two-hour sea journey back to Maiana. But after stopping to fish along the way and sleeping overnight, they woke the following day to find they had drifted out of sight of Maiana and ran out of fuel. "We had food, but the problem was we had nothing to drink," he said. As dehydration took hold, Mr Teitoi, a Catholic, said he turned to prayer as it gave him strength. But Mr Falaile's health began failing and he died on July 4.

"I left him there overnight and slept next to him like at a funeral," Mr Teitoi said. He buried his brother-in-law at sea the next morning. Only a day after Mr Falaile passed away a storm blew into the area and rained for several days allowing Mr Teitoi to fill two five-gallon containers with water. "There were two choices in my mind at the time. Either someone would find me or I would follow my brother-in-law. It was out of my control." He continued to pray regularly and on the morning of September 11 caught sight of a fishing boat in the distance but the crew were unable to see him. Dejected, he did what he had done most days, curling up under a small covered area in the bow to stay out of the tropical sun. 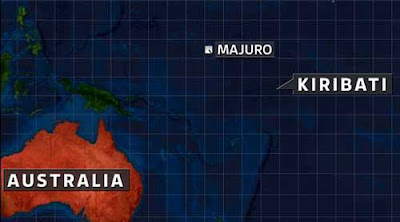 Mr Teitoi said he woke in the afternoon to the sound of scratching and looked overboard to see a six-foot shark circling the boat and bumping the hull. When the shark had his attention it swam off. "He was guiding me to a fishing boat. I looked up and there was the stern of a ship and I could see crew with binoculars looking at me." When the vessel, Marshalls 203, pulled Mr Teitoi on board the first thing he asked for was a cigarette. "They told me to wait. They took me to meet the captain, and they gave me juice and some food." With Mr Teitoi in no physical danger, the Marshalls 203 continued fishing for several days before returning to Majuro. "I'll never go by boat again. I'm taking a plane," Mr Teitoi said.
Posted by arbroath at 6:05 am
Email ThisBlogThis!Share to TwitterShare to Facebook

just goes to show there is Good in all of Gods Creatures
i wonder what type of shark it was ?