A 9-year-old girl was accidentally shot in the shoulder during a Halloween party on Saturday night by a family member who thought she was an animal outside a New Sewickley Township home.

New Sewickley Police Chief Ronald Leindecker said the girl, whom he would not identify, was over a hillside at around 8:30 pm. 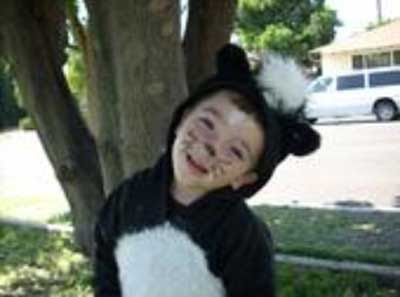 Leindecker said an unidentified male relative mistook the girl, who was wearing a black costume and a black hat with white tassel, for a skunk and shot her in the shoulder with a shotgun. The girl was alert and talking when she was flown to UPMC Children’s Hospital in Pittsburgh.

A report on her condition was not available. Leindecker said he was not sure if charges will be filed. He added that the man had not been drinking. Officers are still investigating and collecting statements, and they will turn over the case to the Beaver County district attorney’s office.
Posted by arbroath at 6:06 am
Email ThisBlogThis!Share to TwitterShare to Facebook

Why did he feel compelled to shoot an animal, anyway? Too bad stupidity isn't against the law.

Wow. what a realistic costume!

Not sure if charges would be filed?
WTH?!