A sea lion weighing about half a ton went for a leisurely stroll about Balneario Camboriu, Santa Catarina on Saturday. 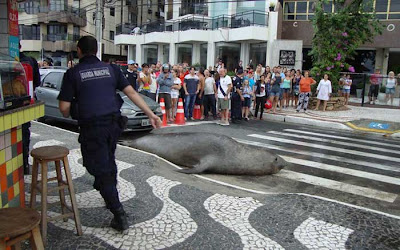 The animal came out of the sea, crossed the sand and landed in the middle of Atlantic Avenue, one of the city's busiest.

The Municipal Guard and firefighters were called and the street closed for 20 minutes.

Some onlookers threw water over the animal to try to help him. According to a biologist from the Department of Environment, the animal probably came out of the sea to rest. One hour and fifty minutes later, he returned alone to the sea.
Posted by arbroath at 6:04 am
Email ThisBlogThis!Share to TwitterShare to Facebook

I think that's a elephant seal,either a female or a young male, not a sea lion. A sea lion supports itself on both front and rear flippers when moving on land. Sea lions also have external ear flaps, that animal doesn't.

I saw it described as both an elephant seal and a sea lion.

I assumed it was something getting lost in translation, but you're probably right, BoS.

Based upon my past experiences with Brazilians, it was probably the most intelligent thing in the city while it was there -- whatever it may have been.

I enjoyed the last line "he returned alone to the sea".

Like he came onshore to get a date but struck out.