Terrified Ukrainian grandmother Angela Artyomova who fell out of her flat was left clinging on to an air-conditioning as she waited for help. 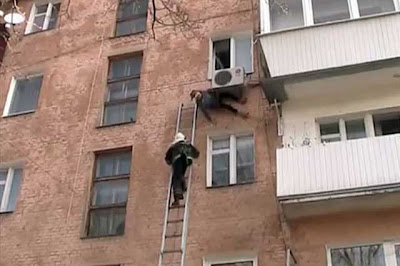 The 97-year-old was left hanging 35ft above street level, suspended from the fourth floor, after she toppled while cleaning windows. The spritely pensioner managed to grab hold of an air conditioning unit at her flat in the city of Rivne after the fall, and then get her foot wedged in the bracket holding it in place. 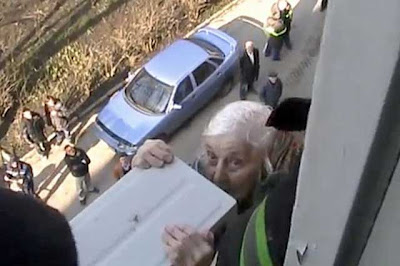 Her terrified calls for help were enough to alert passers by who called firefighters, and she was still hanging on by the time firefighters arrived and rushed to get a ladder underneath her to help her back inside.

Fire brigade officials said they had realised the situation was desperate when they arrived and had no time to set up an air cushion. They used a ladder to speedily get to the OAP - who had been hanging for at least 30 minutes before she was helped back inside. Mrs Artyomova was taken to hospital suffering from shock.
Posted by arbroath at 6:03 am
Email ThisBlogThis!Share to TwitterShare to Facebook

That's pretty impressive, I climb and couldn't hold my bodyweight for 30 minutes. That being said, I'm not normally doing it for dear life.

Her leg was caught in a strap attached to the air-conditioning unit, holding most of her weight. She wasn't supporting herself mainly by her arms. Nevertheless, way to go, granny!