A man's dashcam has captured a driver on the side of the Monash Freeway in Melbourne, Australia, who appeared to be stark naked and urinating on the back of an ute that was parked on the roadside. 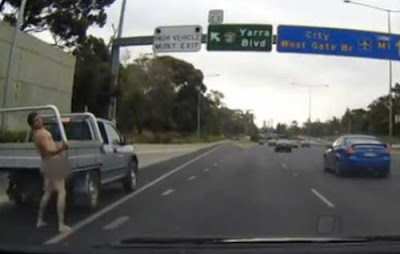 The father-of-two was driving toward the city at about 6pm on Sunday with his children in the car when he spotted the naked man only inches from the freeway where cars were travelling at 80kms an hour.

With his two children on board the father was too nervous to stop and confront the man and find out why he was putting himself and other drivers at risk.

Police are not investigating the incident at this point because no formal complaints have been made, but they have appealed to motorists to make a formal complaint if they witnessed the man. Any investigation into the incident would prove difficult as surveillance cameras did not capture the vehicle's registration, police said.
Posted by arbroath at 6:04 am
Email ThisBlogThis!Share to TwitterShare to Facebook