Residents of a Madrid village have changed their annual running of the bulls to a similar event with giant 125-kilo (275 pounds) polystyrene balls, a move animal rights groups are hoping will be copied in other parts of Spain. Mataelpino, a small community of no more than 1,700 residents just outside the Spanish capital, is the first place in the country to hold a ‘running of the balls’. 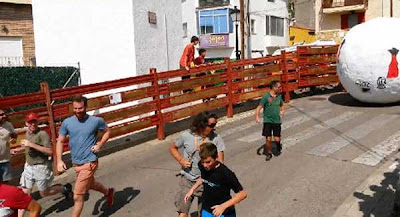 Dubbed boloencierro, a made-up up term which combines the Spanish words for bowling ball and running of the bulls, the event sees participants being ‘chased’ down the sloping streets of Mataelpino by huge polystyrene balls rolling at great speed. Mataelpino has seen a rise in tourism numbers as a result and has also inspired animal rights group Peta to promote the swap around Spain.

“After bull runs the animals are tortured and killed in the bullring,” Peta president Mimi Bekhechi said. “People are also gored or trampled to death. Boloencierro is fun, for all the family and a great alternative for the growing number of people who oppose bullfighting and bull runs.” Peta is so impressed by the potential of ‘ball running’ that they’ve offered to pay the costs of holding the events to any town in Spain willing to ditch their traditional events with bulls.

Although Pamplona’s San Fermin bull runs are the most famous internationally, there are many towns and villages in Spain, Portugal and some parts of South America that have their own ‘encierros’. Some have no official age limit and injuries and casualties are not uncommon. There is growing opposition within Spain to sports events and festivals involving bulls.
Posted by arbroath at 6:01 am
Email ThisBlogThis!Share to TwitterShare to Facebook

That's so Raiders of the Lost Ark.

125Kg of polystyrene? There'll be tiny bits everywhere and imagine the static. By the end of the road it'll be sticking people to it like a katamari. Still, I like it!

Well that's one of the nicest, funniest things I've seen humans do in a long time! I love it!

Bully for them.
I have not bought anything Spanish since I first found out about the ruining of the bulls.
If this catches on, I will start buying Spanish products.
That may even improve their economy.