The vanishing spray used by referees at this summer’s World Cup in Brazil to mark where players should stand at free-kicks has been outlawed in Germany. 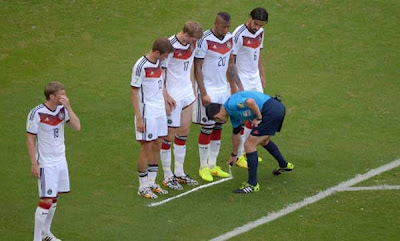 Germany’s Bundesliga was meant to follow the example of the English Premier League and introduce the foam at the end of October. But trading standards watchdog TÜV has hampered the move, saying it should not be allowed in the country. “In its current form the product cannot be used in Germany,” TÜV said.

They argue it could have negative health effects as the green house gas levels in the spray are 33 percent which are “far higher” than the allowed amount. The Argentinean product also doesn’t have a flammable warning on the spray can and no indication of volume, therefore doesn’t meet regulations, Greta Dau from TÜV said. 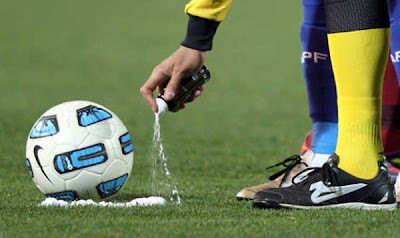 A spokesman for TÜV described the details on the can as “lacking, incomplete and not in German”. The German Football Association said it would now look at alternative products to the Argentinean vanishing spray. The foam was meant to debut on October 17th for the first time in the Bundesliga. If it is used without the TÜV’s approval referees could be fined.
Posted by arbroath at 6:02 am
Email ThisBlogThis!Share to TwitterShare to Facebook