A man from Wigan in Greater Manchester was caught trying to have sex with a shopping arcade postbox. Paul Bennett was spotted by a female witness performing the lewd and bizarre act in Scholes Precinct, Wigan and Leigh Magistrates’ Court heard. Bennett, of Holborn Avenue, Worsley Mesnes, pleaded guilty to two charges of indecent exposure and using threatening and abusive words with abusive behaviour.

Katie Beattie, prosecuting, told the court that on September 9 last year the complainant heard shouting and swearing outside her window. The witness saw the drunken 45-year-old defendant arguing with a woman. After the woman left, Bennett lay down on a bench in the precinct and started to shout. The court was told he sat up and the witness saw him expose himself and pull his trousers down. He then began performing a sex act and walked over to the postbox and “started to make sexual advances towards it.” 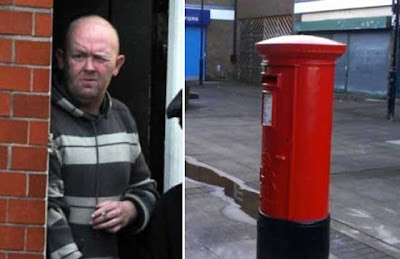 The court was told the worker then witnessed Bennett rubbing up against the postbox with his trousers down before walking away. The defendant’s arms were raised in a star position, he was continuing to expose himself and he was shouting “wow”. Ms Beattie said: “The victim was alarmed by his behaviour.” Bennett pulled his pants up then swung on a lamppost before looking at a reflection of himself in a window. Ms Beattie added: “The victim rang the police. She was disgusted by his behaviour.” Bennett was found by police officers at the front of a shop in the precinct where he was still exposing himself.

The court heard Bennett became agitated and clenched his teeth as he shouted and swore at the officers. A statement read by the prosecution described the defendant as drunk. Defending Martin Jones said: “The lady watched for sometime and was ashamed, disgusted and upset and my client accepts that. Clearly there are issues that need to be addressed.” Bennett was handed a 12-month community order with an alcohol treatment and supervision requirement. He was also ordered to pay £50 compensation to the victim, £150 court costs and £60 victim surcharge. Bennett was also notified to sign the Sex Offenders Register.

With video of the offending postbox.
Posted by arbroath at 6:00 am
Email ThisBlogThis!Share to TwitterShare to Facebook

Well it was a good looking post box though.