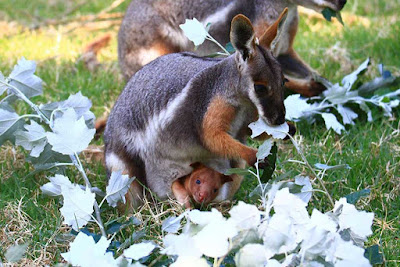 Adelaide Zoo veterinarian Dr David McLelland said cross-fostering had never been attempted on a tree kangaroo until now. "We've had great success over the years cross-fostering between wallaby species, but the specialised breeding technique has never been used on a tree kangaroo," he said. "Not only are tree kangaroos distant relatives of wallabies, they also have many behavioural and physical differences. We had no idea if the yellow-foot rock-wallaby would accept the tree kangaroo joey, but if we wanted to save the joey we had to try our luck." 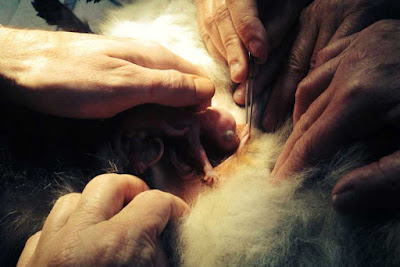 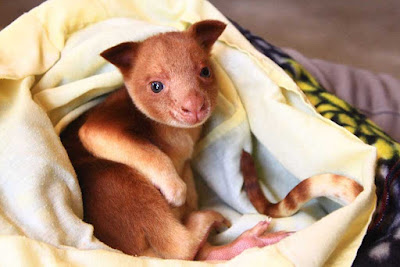 The cross-foster procedure to get the tree kangaroo joey to latch onto the new teat ran smoothly and zoo keepers closely monitored the wallaby over the next couple of days to determine if the attempt was successful. Adelaide Zoo team leader of natives Gayl Males said tiny ripples of movement over the following days confirmed the joey was alive and thriving, tucked carefully away in its surrogate mother's pouch. "We were so excited when we confirmed the joey had made it past the first critical 24-hour period," Ms Males said. "We were uncertain as to whether the joey was going to be accepted. This joey was completely different from other joeys in body shape and behaviour – it certainly wriggled around more than a wallaby joey."

The joey, which has been named Makaia, first popped its head out of the pouch at the end of January. Makaia stayed with his surrogate mum for about three and half months, until Ms Males took over caring for him. "He's certainly a cheeky little fellow and loves running amok, testing the boundaries, using my home as his personal playground, climbing on everything, pulling toilet paper off the rolls, but he also loves quiet time cuddling with my husband in the evening while we watch TV," Ms Males said. Adelaide Zoo said it would share its findings with other zoos around the world to help guide breeding efforts for endangered tree kangaroo species and increase the success of internationally coordinated captive breeding programs.
Posted by arbroath at 6:03 am
Email ThisBlogThis!Share to TwitterShare to Facebook