An woman from Adelaide, Australia, got the fright of her life when she went to get a drink from the fridge and discovered a venomous brown snake peering out from underneath. The snake also had a belly full of eggs that it was about to lay in the warmth and humidity of the fridge. 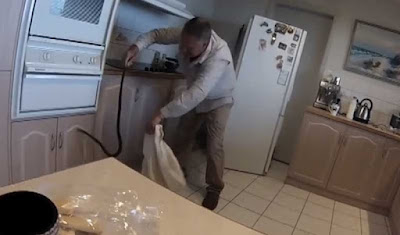 Rolly Burrell of Snake Catchers Adelaide, who caught the snake on Sunday, said the snake laid 14 eggs in captivity a few days later. "It's lucky she saw the snake now or she might have been going to the fridge to get a drink later on and seen all these little critters all over the place," Mr Burrell said. 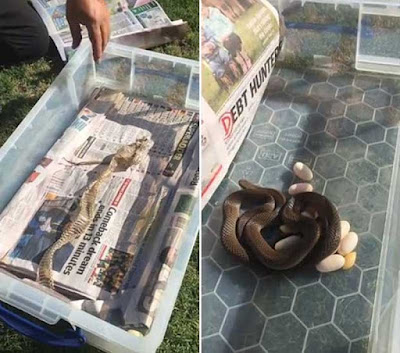 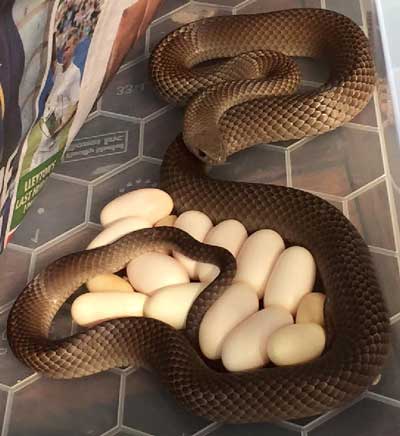 The incubation period for brown snakes is between 55 and 80 days. Mr Burrell said it was easy to catch the snake and he simply moved the fridge and grabbed it. "I've been doing it for 40 years and I make it look easy. When you're doing 300 snakes a month you tend to get a little bit blase."

Brown snakes are the second deadliest land snake in the world and shed their skin several days before they give birth, Mr Burell said. The snake is recovering after being exhausted during the recent birth and has been given some mice and water to give her strength before she is released. The eggs will be kept in an incubator and are predicted to hatch in March.
Posted by arbroath at 6:05 am
Email ThisBlogThis!Share to TwitterShare to Facebook