A Florida man was arrested last week after travelling six miles with his wife on the roof of his vehicle, police say. According to investigators, Richard Addy, 69, and his wife Elizabeth argued early last Tuesday morning after they had consumed “several drinks over the course of the night” at a couple of bars. Richard told police that he eventually decided to “leave the scene” without his 50-year-old spouse. 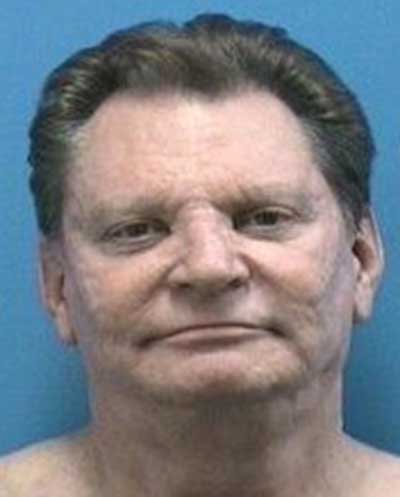 Addy said that he drove away in a 2011 Toyota Sequoia, but “did not realise that his wife was on the roof of the vehicle.” It was only when he stopped at a traffic light that he “heard her banging on the roof and realised that she was there.” However, instead of stopping, Addy drove on, he claimed, because he “did not have a cell phone to call the police.” Addy said that he went by the county courthouse in the hope of finding a “police presence,” but when he spotted no officers, he continued driving.

Addy finally came to a halt when Officer Christopher Ruediger of the Stuart Police Department spotted Elizabeth on top of the vehicle and pulled the car over. Elizabeth, the officer noted, “was yelling for help and waving her hands at me.” The vehicle was stopped at an intersection six miles from where Addy began his trip. After Ruediger helped her down, Elizabeth said that she was “banging on the roof and screaming for help the entire time.” 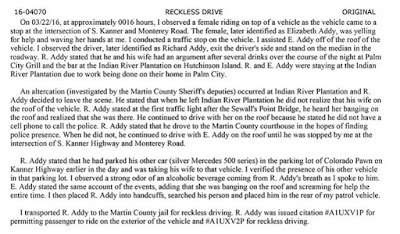 The report, however, does not reveal why Elizabeth climbed on top of the car in the first place. While Ruediger noted detecting “a strong odour of alcoholic beverage” coming from Addy’s breath, Addy was only arrested for reckless driving, a misdemeanor, and permitting a passenger to ride on the exterior of a vehicle. The reckless driving citation issued by Ruediger noted that, “Wife riding on roof for several miles.” On Monday, Addy pleaded not guilty to both charges.
Posted by arbroath at 6:06 am
Email ThisBlogThis!Share to TwitterShare to Facebook