Police are investigating the case of the mystery meat found alongside several roads in Epping, New Hampshire, over the weekend. The discovery of chicken, drumsticks, sausage, Angus steaks, pork chops and wild game meats, including venison, was made by residents who notified police on Sunday. Police Capt. Jason Newman said an estimated 30 to 40 packages of meat were discarded on Red Oak Hill, Rocky Lane, Old Nottingham Road and Route 87. Much of the meat was still partially frozen. 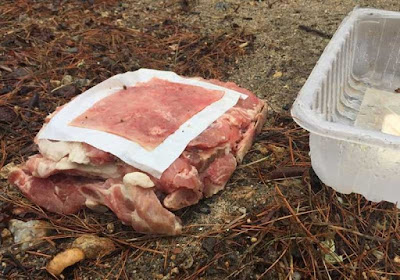 “This is not your average investigation,” Newman said. It appears packages of meat were thrown out of a moving vehicle about every 200 feet. Red Oak Hill resident Jude David picked up a whole frozen chicken near her house and disposed of it. “I was horrified by the amount of meat that was just discarded all over the place. We’re not talking a small package. There was a lot of product,” she said. While most of the meat was still in its packaging, Newman said the labels were ripped off, which made it difficult to identify the source. However, police got lucky with one piece of meat.

“We found a package where they forgot to pull the label off and because of that we have some leads,” Newman said. The label indicated that the meat came from a local store, but Newman declined to identify the market as police continue their probe. At this point, police haven’t pinpointed a motive for the strange meat display. “We’re still investigating what the motive would be in doing this,” Newman said. Investigators don’t believe the meat was thrown out to attract wildlife, he said.

They’re also not sure if the meat’s sell-by dates were expired, but Newman said he doesn’t believe that played a role in the meat-dumping. If the person responsible is found, police plan to pursue misdemeanor illegal dumping charges. “This is an unusual circumstance, but we’re certainly going to investigate it so we can prevent it from happening in the future,” Newman said. Highway Supervisor Dave Reinhold said workers cleaned up the meat on Monday and threw it away. Anyone with information is asked to call the Epping Police Department.
Posted by arbroath at 6:06 am
Email ThisBlogThis!Share to TwitterShare to Facebook

Hungry poor people would probably have appreciated it. What a waste.