Teenager rescued by firefighters after getting stuck in baby swing

A teenager needed rescuing from a baby swing by firefighters last week.

The 14-year-old became stuck after forcing his way into the swing in Knaresborough, North Yorkshire.

Fire crews were then called to the play area behind Knaresborough Community Centre. 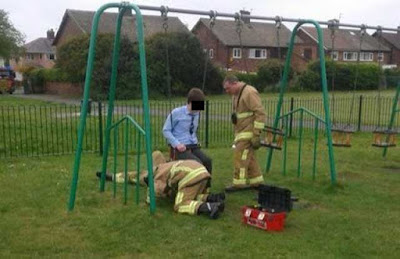 Firefighters used a socket set and small gear to release the trapped teenager, leaving him with just a bruised ego.
Posted by arbroath at 6:00 am
Email ThisBlogThis!Share to TwitterShare to Facebook

Sad to say that this almost happened to me once. I hadn't been on a swing in years and then I have children. Naturally you end up near swings everyday, so there I was laughing and having fun and I decided to sit on the swing. My eyes nearly popped out of my head from how tight it was and then I thought I couldn't get out. Well the thought of people laughing at me gave me the strength I needed to shoot out of that seat so quickly, but boy did it hurt. They now have these bendable rubber seats that anyone can sit on, but still a bit tight though.