A woman has taken to sleeping in her car to escape smelly fumes she claims are making nights unbearable. 66-year-old Susan Cook has even sealed up her windows with plastic bin bags to prevent what she says are offensive fumes from seeping into her property in Aylesford, Kent. But nothing appears to work and now she says she’s at her wit’s end.

Mrs Cook has lived in the housing association home since 2006 but didn’t experience problems until 2012. Mother-of-four Mrs Cook said: “It’s terrible. “I only get the fumes at night. I can’t sleep in my bedroom. Sometimes I’ve slept on the floor in the hallway, sometimes I’ve had to sleep in the car. Anything to get away from the smell.” Mrs Cook, who rents from Circle Housing Russet, feels no one is willing to help and the lack of sleep is now ruining her health. 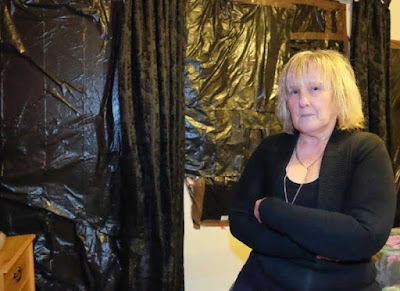 She said: “I’m at my wit’s end.” Tonbridge and Malling environmental health department sent an inspector, but Mrs Cook said it was during the day when there isn’t an issue. Mrs Cook has also complained to Circle Housing and to RBL, which owns a neighbouring property, as she feels it could be caused by a boiler. Jackie Wilkinson, the head of housing services for Circle Housing Russet, said: “The safety of our residents is our absolute priority.

“We carried out full tests inside Mrs Cook’s home, which found no evidence of this issue. “We understand the problem may be caused by a neighbouring home, and we have raised the issue with Royal British Legion, who own the property.” James Sancto from RBL said: “We are aware of Mrs Cook’s complaints and we have been checking the boiler in our property regularly, but it is fine. It was serviced last only a couple of weeks ago and no problem was found.”
Posted by arbroath at 6:00 am
Email ThisBlogThis!Share to TwitterShare to Facebook

Maybe it's in her head?

Not to be dismissive but maybe it's a psychosomatic disorder triggered by her being prone? She'd be certain she was smelling something but there really isn't an exterior scent...

That or it's a demon. Take your pick.