Customers ran for their lives on Saturday as a driver rammed his car into the front of a shop four times, minutes after going in to ask if there was CCTV installed. The car was driven so fiercely into the Auto Shop in Rochdale, Greater Manchester, that the entire front of the shop collapsed, leaving the owner injured and severely shaken up. Mohammed Yousaf, who runs the car accessories store, explained how the man staggered in “intoxicated”. He said: “I was really confused. He came in saying he owed me an apology. I told him that I didn’t know what he was talking about. Then he asked if I have CCTV. 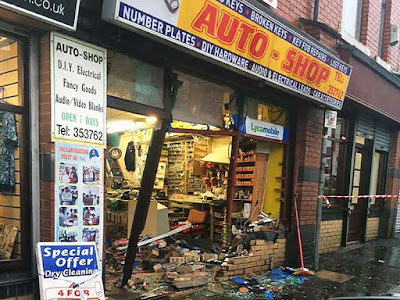 “At that point I was nervous that he was about to do something. I had no idea that it was going to be that bad. He left the shop and came back in his car. He just rammed the car right into the window, not once but four times, until the car was actually inside the shop.” The building was so badly damaged that fire crews joined with a council structural engineer to carry out an inspection in case there was a danger of the shop collapsing completely. Mr Yousaf added: “I thank God to be alive. I thank God all of us are alive, my customers were standing right here and had to run for cover.

“The car was actually inside the shop, it seemed like this man’s intention was to kill us.” The driver threatened a woman who was parked in his way before carrying out the attack. Mr Yousaf said: “He actually opened her car door and shouted at her to move. She was petrified and moved her car, obviously at the time nobody knew why. It turned out he was moving her out of the way so he could attack us. It is the first time ever I can say that I actually ran for my life. I have never been so shaken up about anything. I couldn’t eat anything for the rest of that day, I just kept thinking that I could have died.

"He needs to go to prison for a long time for what he did.” Greater Manchester Fire and Rescue Service, National Grid, Rochdale Borough Council and Greater Manchester Police all attended the scene. A spokesperson for Greater Manchester Police said: “Officers were called to the scene at 11.30 in the morning after reports that the shop had been attacked by a car. The complete face of the shop had been destroyed, so the fire service and a structural engineer from the council were also called out. A number of people were in the shop at the time of the attack. There were two people with minor injuries, one to the leg and the other to the neck. ” Enquiries are ongoing.
Posted by arbroath at 6:01 am
Email ThisBlogThis!Share to TwitterShare to Facebook