An anti-bullying charity has called for a gym billboard poster to be removed for being "offensive". The poster, on Tamworth Road, in Sawley, Derbyshire, shows aliens beaming up a person into their spaceship with the text, "they'll take the fat ones first". Combat Bullying, based in Nottinghamshire, said it would "further harm" those who are being bullied. 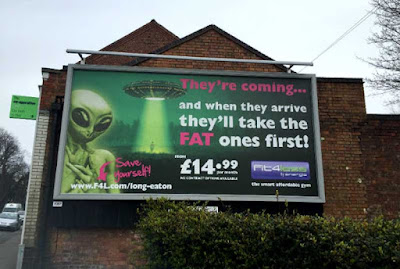 Fit4Less said it wanted to create an "light-hearted and humorous" advert. It reads: "They're coming… and when they arrive they'll take the FAT ones first!". It then has "save yourself!" with an arrow pointing to the gym's website. One passer-by said the poster was "ridiculous" and he would "rip it down" because "being a big lad myself, it upsets you". Many other people said it was "in poor taste" and "offensive".

Natalie Harvey, founder of the charity, said the poster has caused her concerns because it would "aid bullying". "This week alone three cases have been brought to my attention of children being bullied because of weight issues," she said. "If those children or the perpetrators saw this poster it would cause further harm for the children who are being bullied. 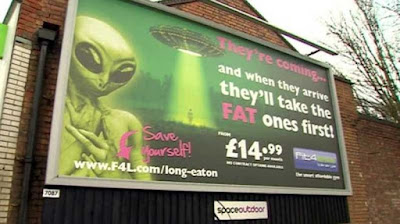 "The poster should be removed and replaced with something more tasteful to attract the gym goers." Kerry Matthews, from the gym in Long Eaton, Derbyshire, said: "We really didn't mean it offensively. It was supposed to be a bit cheeky, hence the alien image, and grab people's attention in a couple of seconds. So many campaigns use ultra skinny people and that's not the reality." Ms Matthews added that the gym wanted to get people talking about getting fitter. =
Posted by arbroath at 6:00 am
Email ThisBlogThis!Share to TwitterShare to Facebook

If they're advanced enough to cross intergalactic space, they're smart enough to prefer lean meat. Lol.