A swan brought traffic to a standstill in Manchster city centre on Monday morning. Vehicles, including an HGV, were reduced to crawling speed as the bird casually ambled down the middle of busy dual carriageway Great Ancoats Street at around 10am. 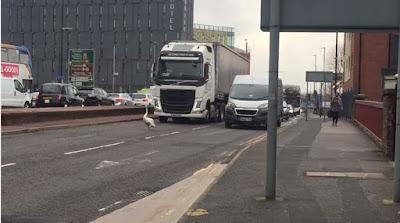 The video was filmed by city centre resident Joe Daly, 29, who stumbled across the delays as he headed out of his flat near Piccadilly Basin. It is believed to have strayed from the Rochdale Canal which runs underneath. 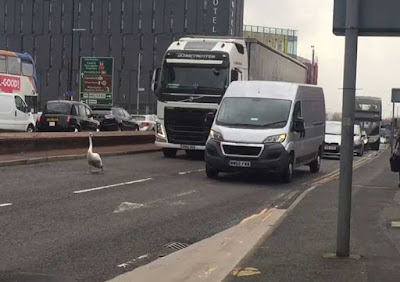 Joe, who runs a literature organisation called Bad Language, alerted the police who came to check on the animal and ensure traffic could keep moving. He said: “I’d just left the flat and I saw it walking down the road. It looked really lost and was just walking straight down the middle of the road really slowly.

“It didn’t seem aware of anything that was going on around it. All the drivers were really patient and considerate, those who could get round it made sure they did really slowly. It eventually crossed onto the opposite side of the road. I called the police so they could come and make sure it was okay and didn’t get hurt.”
Posted by arbroath at 6:01 am
Email ThisBlogThis!Share to TwitterShare to Facebook