For the past month a mystery man now known as Cool Yoghurt Guy has been sticking the lids of Meadow Fresh yoghurt, which he has presumably just eaten, to the window of the Gordon Harris art supplies store in central Auckland, New Zealand. It happens around three times a week: at around 8am branch manager Aaron King-Cole arrives at the store to find a yoghurt lid stuck to the window.

Cool Yoghurt Guy appears to lick the flimsy lids mostly clean before applying them, but there's still plenty of dairy to act as adhesive. By the time King-Cole arrives, the lids have been baking in the sun for a few hours. The yoghurt is dry, crusty and hard to remove. "They definitely leave some yoghurty residue," he says. Like his identity, Cool Yoghurt Guy's purpose is enigmatic. But King-Cole is getting sick of cleaning dried yoghurt off the shop window. 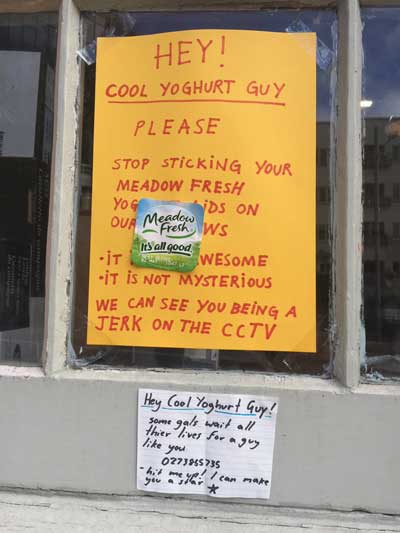 "It's mostly really annoying, yeah. I don't know, it's kind of funny, but mostly just really annoying," he says. "We're not really sure what he's doing. At all." Over a week ago, the shop put up a sign asking Cool Yoghurt Guy to desist. "Hey! Cool Yoghurt Guy," it read. "Please stop sticking your Meadow Fresh lids on our windows. It is not awesome. It is not mysterious. We can see you being a jerk on CCTV." However, the sign seemed only to incense Cool Yoghurt Guy, who has started sticking his lids over it.

King-Cole has captured him on CCTV, but it's 6.45am as he sticks the lid on, and it's too dark to discern his face. "There's not really much we can do about it. We were hoping a sign might at least make him aware that we know that he's doing it and we're having to deal with it and hopefully he'd stop. But he's just sort of started putting them on the sign." And Cool Yoghurt Guy now appears to have a female admirer. She stuck up a sign underneath the shop's sign that reads: "Hey Cool Yoghurt Guy! Some gals wait all their lives for a guy like you." She leaves him a phone number with the words: "Hit me up! I can make you a star."
Posted by arbroath at 6:04 am
Email ThisBlogThis!Share to TwitterShare to Facebook

I'd really just go to work 1.5h early to get him