Woman displeased about waking up to raccoon sex

It was too early on Thursday morning for Ava Kwinter to unsee what she describes as a “traumatic” start to her day. As she passed by her door leading to the second-floor balcony of her home in Toronto, Canada, just before 7am, she saw two shadowy figures locked in an embrace. “The sun was already coming up but it was still dark,” she said. “I saw some movement in the corner of my eye. And they were right there. I was just stunned.”

Ms Kwinter had caught two raccoons having sex. There are a million raccoon stories in the city and this one explains why we have so many of the critters. Ms Kwinter said she was on her way to wake up her daughter when she found the frisky animals. The amorous raccoons may, in fact, have been exhibitionists, as they didn’t scare easily even though Ms Kwinter banged on the glass door and flipped on the light switch, shining a spotlight on the couple, mid-coitus. 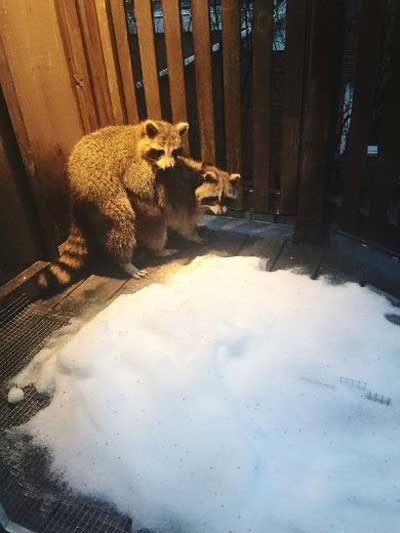 And the male apparently had some stamina, lasting over 25 minutes. “My daughter said: ‘Oh, they’re so sweet. They’re hugging’ and I was like, ‘This is disgusting,’” she said. “They started growling and baring their teeth and they started tussling with each other. We went down for breakfast and I went back up to check on them and they were still there.” Ms Kwinter described the lovemaking as “quiet” except when they were interrupted. “Then they started making this squeaking, a really unnerving high-pitched sound,” she said.

“Otherwise, they were looking around. Their faces were totally casual. I didn’t see how they dispersed.” Soon after, Ms Kwinter phoned a pest control company and was told by the call-taker he had never seen anything like that during his 20 years in raccoon removal business. She is concerned the female raccoon may return to the balcony to give birth to babies, so she is trying to ensure the space is raccoon-proof. “I’m an animal lover but I can’t stand this,” she said. “I found it gross and disgusting. There is still tufts of hair and gunk all over the balcony ... it’s so gross.”
Posted by arbroath at 6:05 am
Email ThisBlogThis!Share to TwitterShare to Facebook

It's so hard to have a polite response to such an idiotic woman when all you want to say is she's a dumb bitch.

Nature is just so disgusting!

Everyone knows raccoon babies come from the starling, who delivers them in white, cotton blankies.

Shak, you do female dogs a great injustice by calling this woman a bitch. She is vile, and I feel sorry for her husband, but please don't compare her to a dog.

Lol, Barbwire. Years ago, while I was in Jr. High, this other female and I got into a fight starting with vile letters to each other. After I confronted her in the lunch room, she went running to the principal's office with the note I gave her. He made me read it out loud. I called her a bitch in it. The principal asked me what that meant and I told him it was a female dog. He said, "Yes, but you really didn't mean it that way, did you?" I told him I didn't even though my description was technically true. So, Barbwire, I'm going to tell you the same thing. I didn't mean it in the technical way. After all, somebody can bitch about something and it still has nothing to do with dogs.

I know, Shak. I just felt that this woman was so vile she deserved to be called something unquestionably awful.