A suspect in the burglary of a Family Dollar store in Florida tried to elude capture by spraying his legs with fire extinguishers, but instead is in the Hernando County Jail. At about 10:33pm on Monday, someone walking in Spring Hill reported hearing breaking glass and then saw a man running from a Family Dollar store.

Deputies from Hernando County Sheriff's Office found the store's front glass window had been broken with a cinder block. They later noted the suspect, Anthony Dixon Jr., 18, appeared to turn off the power to the business before breaking the window and entering the business. Additional deputies and a K-9 unit were called in to search for Dixon. 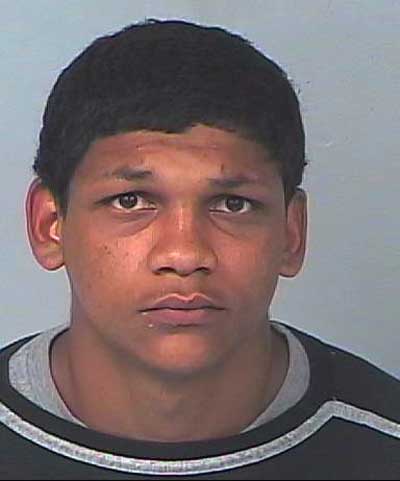 Deputies then noticed an area behind a neighbouring business that had a large amount of a white powdery substance from a fire extinguisher had been sprayed. Investigators then found two spent fire extinguishers. Deputies, with help from bystanders, found Dixon walking nearby. He had a white powdery substance on his legs and was taken into custody.

Dixon admitted to breaking into the Family Dollar store in an attempt to steal cigarettes and added that he stole the fire extinguishers and sprayed himself in an attempt to elude capture. Dixon was transported to the Hernando County Detention Centre on charges of burglary and criminal mischief. He was also charged with two counts of grand theft in connection with the stolen fire extinguishers. His bond was set at $11,000.
Posted by arbroath at 6:07 am
Email ThisBlogThis!Share to TwitterShare to Facebook

Can anybody come up with a reason why this guy thought spraying himself with a fire hydrant would abet him in an escape? Husband and I were trying to think of one to no avail.

Maybe he thought police dogs would be called in to track him and the fire extinguishers would disguise his smell? But really, I read that whole thing hoping someone one would have asked him his logic.

Maybe he thought the spray would make him invisible?

He should have tried vanishing cream.