A woman arrested for cocaine possession told jailers in Florida that the crack pipe found hidden in her vagina was not her property, but rather she was storing the drug paraphernalia for a friend. Tiffany Flores, 23, was arrested on Tuesday afternoon following a traffic stop in Fellsmere, a city just north of Vero Beach, where Flores resides. 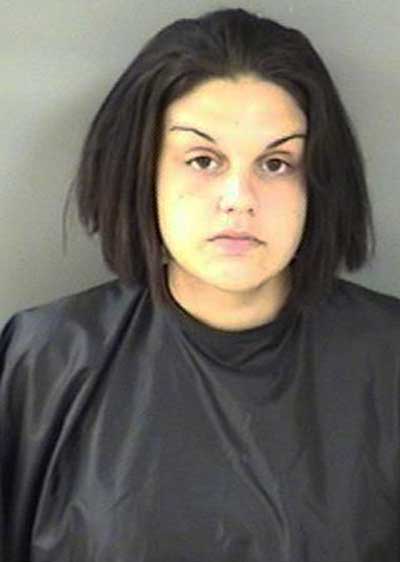 Flores, a passenger in the vehicle stopped, confessed to ownership of a small bag of cocaine that a police officer found on the roadway “directly beside the passenger door frame,” according to an arrest affidavit. After initially denying that she had thrown the cocaine out of the car window, Flores reportedly admitted to owning it, which she said she purchased from a man named “Nino.” Upon arriving at the county jail, Flores claimed that she could not go through a scanner since she was pregnant.

But after a pregnancy test showed negative results, “jail staff processed Flores through the body scanner.” That is when officers noticed a “foreign object located inside of Flores’s vaginal area.” Flores subsequently retrieved “a clear cylindrical tube containing a burnt end” and gave it to an officer. But the crack pipe was not hers, explained Flores, who said that the item was owned by a female friend who was driving the car that had been pulled over. 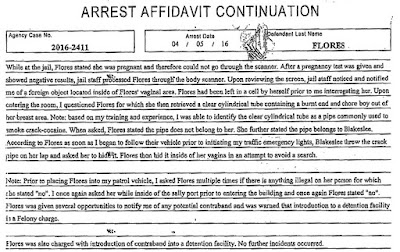 Flores claimed that her pal “threw the crack pipe on her lap” and asked her to hide the item when a patrolman began following them. “Flores then hid it inside of her vagina in an attempt to avoid a search,” according to the affidavit. Despite that explanation, Flores was charged with introducing contraband into a correctional facility, along with drug possession and tampering with evidence counts. Locked up in lieu of $11,000 bond, Flores has previously been arrested for theft, cocaine possession, credit card fraud, and resisting arrest.
Posted by arbroath at 6:06 am
Email ThisBlogThis!Share to TwitterShare to Facebook