A driver is being sought by police after a market trader was left clinging to the bonnet of a van after the vehicle’s driver smashed into his flower stall before accelerating off. Police say an altercation happened at 07:20am at the weekly market in Shaftesbury, Dorset, on Thursday. The Peugeot van reversed into a flower display, before being driven into one of the stall holders, carrying him along the road before he fell off. Glyn Chadderton was carried along for around 50 metres as he attempted to stop the driver destroying his stall. 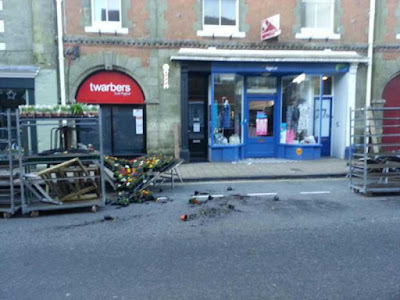 His ordeal ended only when he fell off the bonnet, injuring his hip and shoulder. However, Mr Chadderton believes he could have been killed in the incident, which took place as traders set up. He said: “The van was parked right in the middle of the patch where I have my stall. The council always says we should set up around vehicles - there are restrictions on market days, but sometimes people still leave their cars on the road.

“Then this bloke came out and said to me, ‘You have to move, I’m going to work’. I told him he’d have to give me a minute but he said, ‘If you don’t move it, I’ll move it for you’. He got in the van and locked the doors. Then he reversed over the plants on the ground and backed into the trestle tables before driving forwards through the rest of the plants. I was stood in front of him trying to stop him, and that’s when he drove at me.” Mr Chadderton was able to cling to the bonnet of the van, but slipped off the side as the driver turned a corner. 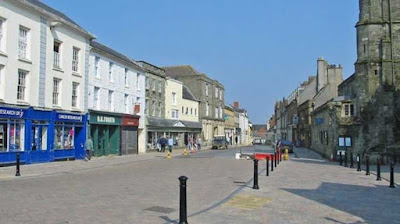 He said: “I’m convinced that if I’d fallen off the front of the bonnet, he couldn’t have stopped in time and he’d have run me over.” Clive Carter, who chairs the Shaftesbury and District Chamber of Trade, said: “There are parking restrictions on Thursdays because of the market, but sometimes cars are just left there anyway - it’s caused all sorts of problems. This van has been there on market days several times.” The van driver is described as being tall, aged in his late 50s and of skinny build. He had a Scottish accent. Dorset police are investigating.
Posted by arbroath at 6:01 am
Email ThisBlogThis!Share to TwitterShare to Facebook