Family ordered to destroy their vegetable garden or face a fine

There’s a new ordinance in Sugar Creek, Missouri, that restricts the use of agriculture on properties in the city. Nathan Athans believes it’s a witch hunt against him. Athans grows several different types of vegetables in his front yard loves tending to his garden. “I'd probably say about 300 hours [so far this year], I spend all my free time out here,” Athans said. 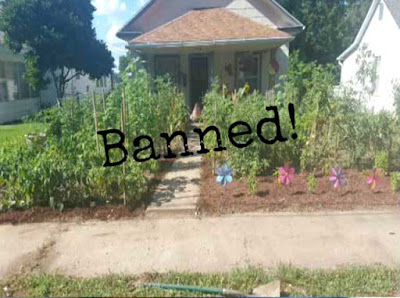 He believes it’s important for his family. “I want my family to know where their food is coming from, I don't want to have to go to the grocery store and worry about what was done to that food.” However, neighbours and city officials don’t see the garden the same way. Last summer the city cited Athans for weeds in his garden but he said he complied. “We did it, completely weed-free, we paid our citation,” he said.

The city’s building official, Paul Loving, argued otherwise. “I don't know that there would have been a problem with them had the gardens been well kept, they weren't.” The new ordinance specifies that vegetation must be 30 feet from the street. Athans said he can’t grow the garden in his backyard because it only gets about two hours of sunshine and only in certain areas.

Loving said the city received many complaints and the ordinance is the resolution. “Because I want my yard a certain way doesn't mean the neighbourhood has to keep his yard the same way, but I do have an expectation that we'll all be reasonable in what we put in our front yards.” The family has been given four days to get rid of their front yard garden or face a fine. They’ve started an online petition in the hope of getting the city to change the ordinance.
Posted by arbroath at 6:06 am
Email ThisBlogThis!Share to TwitterShare to Facebook

I think it would make sense for everyone to do this. Here in Southern California, for years people tried to make their lawns look like something from England. Well, we don't get very much rain here, so it used a ton of water. Lots of people are replacing their grass with native plants, but I would love to see vegetable gardens, too.

@Barbwire. What do you mean "something from England"? Here in Britain we are not only allowed to grow vegetables in our gardens, but many of us do.

Only in the US would people be banned from growing their own vegetables.

I see nothing wrong with his garden. It is his property and he should do whatever he wants on his property.

@Gareth: I meant the lovely lawns the big estates have. England has lots of rain to keep the grass lush and green, where here in SoCal, we've had drought conditions for several years.