Firefighters were called out to an address last week following reports that a large dog was up a tree.

One crew from the Springbourne suburb of Bournemouth was sent to investigate the matter after they received information that a dog was trapped. 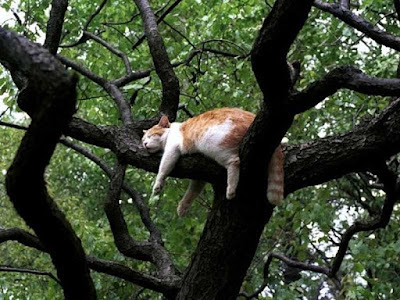 But the firefighters left the animal there after they discovered it was a cat, on the advice of the RSPCA.

A spokesman for Dorset Fire and Rescue Service said: "All we know was it was called in as a large dog up a tree but it turned out to be a cat."
Posted by arbroath at 6:00 am
Email ThisBlogThis!Share to TwitterShare to Facebook

Plot twist: The cat helped the dog down but was exhausted so it took a nap.