A cuddly toy dog who was sent to the edge of space as part of a school science project has gone missing in action, despite the return to earth of the craft he went up in. 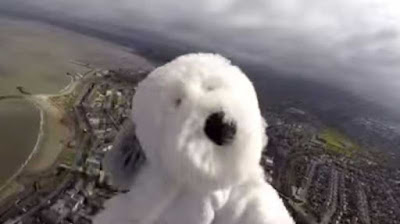 The equipment used to launch 'Sam the Dog' and record his ascent was recovered from a field near Burnley in Lancashire, but Sam was nowhere to be found. It is believed he may have come detached on re-entry. 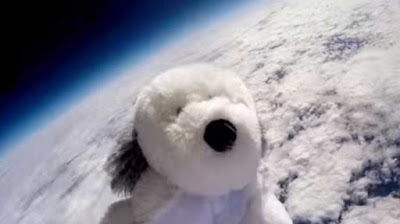 Pupils from Morecambe Bay Community Primary School had been monitoring Sam's progress using GPS tracking equipment. According to the flight data, Sam, the mascot of a Lake District tourism organisation, returned to earth within a 40-50 mile radius of the landing site.

Sam was launched into space on the 5 April using a helium balloon and tracked by a GPS equipment and a camera. Anyone who finds Sam is being asked to contact English Lakes Hotels Resorts and Venues, which is offering a night in a four-star hotel as a reward for his safe return.
Posted by arbroath at 6:01 am
Email ThisBlogThis!Share to TwitterShare to Facebook