A man from North Olmsted, Ohio, is facing criminal charges after he ran over a fire hydrant and damaged several tree lawns while driving drunk, police said. Brad J. Flynn, 41, was wearing underpants and a child's snowsuit on one leg when Fairview Park officers approached his vehicle, according to a police report.

Flynn is charged with operating a vehicle under the influence, high blood alcohol content, hit skip, open container, and willful or wanton disregard of safety of persons or property, according to court records. He is scheduled to appear in Rocky River Municipal Court on April 6. 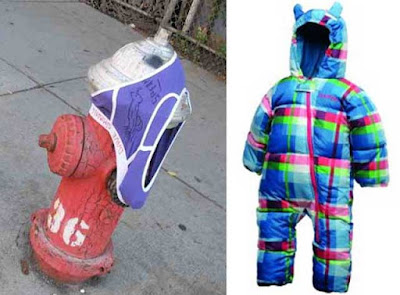 A resident called police to report a hit-skip accident at about 11:30pm on March 22. The resident followed a dark-coloured SUV to a plaza parking lot. Police found Flynn behind the wheel of the SUV. Flynn's blood alcohol level was .117, police said. The legal limit is .08.

He is accused of driving over six tree lawns and shearing a fire hydrant at its base. Wine bottles were strewn around the SUV, and Flynn told police he had no idea he had struck a fire hydrant. One of the SUV's wheels was destroyed. The snowsuit belonged to Flynn's 9-year-old daughter, police said.
Posted by arbroath at 6:06 am
Email ThisBlogThis!Share to TwitterShare to Facebook

What is a tree lawn? I've never heard the term before.

It isn't a term I'd heard before, Barbwire, but according to Wikipedia it's a grass verge.

A tree lawn, also known as a devil strip, is the area of grass between the sidewalk and the road. In Ohio most residence plant a tree in that area and that's how it became a tree lawn. Not sure though how the term devil strip came to be.

Thanks for the explanation, Unknown!

Wow! Thank you. I've heard it called a parkway, and a Canadian neighbor called it a boulevard, but never a tree lawn. It makes sens, though. Much more so that boulevard.