Gassy sea turtle treated for the bends so he can dive

Vets have put a rescued sea turtle into a hyperbaric chamber, usually used to treat human divers suffering the bends, in a bid to remove gas bubbles in its body that stop it diving. Experts from Seattle were due to test the buoyancy of Tucker the 20-year-old endangered olive ridley sea turtle on Friday in the hope that they can one day release him back into the ocean. 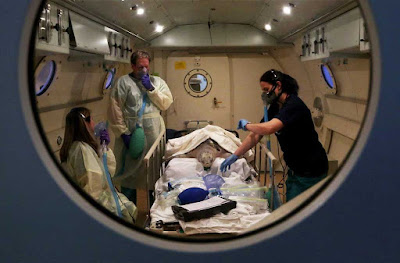 The 32kg animal was found in December clinging to life along the coast of Oregon, far from his species’ usual warm-water habitat off southern California and Mexico, said Seattle Aquarium officials. He has recovered from pneumonia and other complications from hypothermia but still has a buoyancy issue caused by internal gas bubbles in his body that prevent the reptile from diving or remaining underwater. “It’s almost like the turtle is wearing a life preserver,” Seattle Aquarium spokesman Tim Kuniholm said on Thursday. 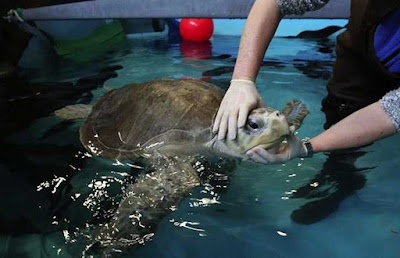 Aquarium vets took Tucker to Virginia Mason hospital on Monday for a session in the hyperbaric oxygen chamber there, making him the first non-human patient to visit the pressurised facility and the first sea turtle in the US to undergo such a treatment for buoyancy problems. Tucker will undergo testing to determine if further sessions in the chamber are needed, Kuniholm said. Kuniholm said Tucker must be able to regulate his buoyancy in order to survive in the wild, where he needs to dive for food and avoid predators as well as hazards such as boats.

“He could remain in human care, but that’s not our goal,” he added. The hyperbaric treatment involves the turtle breathing 100% oxygen for more than two hours, hospital officials said. Tucker was sedated and observed closely while hooked up to a heart monitor and breathing tube. James Holm, the medical director at the centre for hyperbaric medicine, said: “We have treated many scuba divers over the years for a gas bubble disease known as decompression sickness, which is also called ‘the bends’. This is the first time we have been asked to assist in the care of a sea turtle, which are excellent divers themselves.”
Posted by arbroath at 6:07 am
Email ThisBlogThis!Share to TwitterShare to Facebook