Police have issued an apology after a Facebook post about the theft of a box of eggs worth £1.20 from a chicken sanctuary. The owner of Hedwig’s House Chicken Sanctuary in Hest Bank, Lancashire, said she faced personal abuse on social media after the Morecambe Area Police Facebook post appeared with a CCTV picture. Morecambe Area Police said on Tuesday: “We are asking for assistance with an eggtraordinary crime ! We need to identify the chap in the picture who we need to speak to regarding the theft of eggs.

“We have scrambled the troops to try our best to detect this crime !! We can’t be having people ducking justice and this is the kind of crime that offenders need to shell out at court when they get fined! All joking aside if you know this guy let us know on 101 or 01524 596986 and quote crime ref WB1602616. The theft of eggs occurred at 11:30 on 02/04/16 at Hest Bank Morecambe. Thank you yolks.......sorry I mean folks !!” Owner of Hedwig’s House Tina Wilkinson said: “I feel like they made me a laughing stock and they never mentioned the sanctuary in their post. 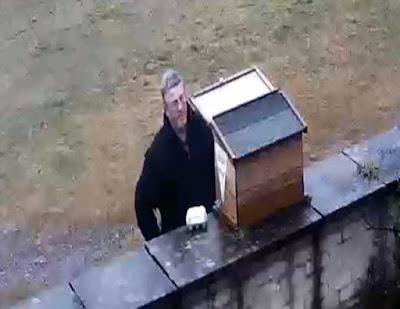 “After the post went up, people were saying that even the police thought I was a joke. I was very upset and felt like giving up the charity. However, Inspector Banks-Lyon has personally apologised to me and has also put a post on Facebook. I probably will carry on with the charity but I will have to see how the fundraising goes. The chickens, ducks, and turkeys have saved me, as much as I save them.” On Wednesday Morecambe Area Police said on Facebook: ”Yesterday Morecambe Area Police posted a CCTV still of a suspect we would like to speak to in relation to the theft of some eggs. 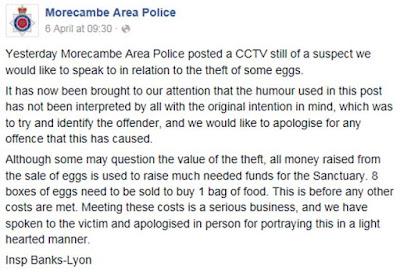 “It has now been brought to our attention that the humour used in this post has not been interpreted by all with the original intention in mind, which was to try and identify the offender, and we would like to apologise for any offence that this has caused. Although some may question the value of the theft, all money raised from the sale of eggs is used to raise much needed funds for the Sanctuary. Eight boxes of eggs need to be sold to buy one bag of food. This is before any other costs are met. Meeting these costs is a serious business, and we have spoken to the victim and apologised in person for portraying this in a light hearted manner.” - Insp Banks-Lyon.” Police have yet to trace the thief, who stole the box of eggs on April 2 from Hedwig’s House Chicken Sanctuary.
Posted by arbroath at 6:00 am
Email ThisBlogThis!Share to TwitterShare to Facebook