Vandals have wrenched free and stolen the same poop-scoop bin in Barwell, Leicestershire, twice in a month. The container was bolted to a steel post and grounded in concrete. However, that hasn’t stopped the wreckers in their aim to get rid of the bin. The receptacle was initially taken during the last week of February, replaced, then stolen again the weekend of March 26.

Barwell Parish Council is responsible for the 27 bins around the village which cost about £95 to buy and extra to install. While replacement bins have been bought from parish funds the budget has not been raided for the fitting. Council chairman Barry Granger and fellow parish councillor Huw Williams installed the bins on both occasions. 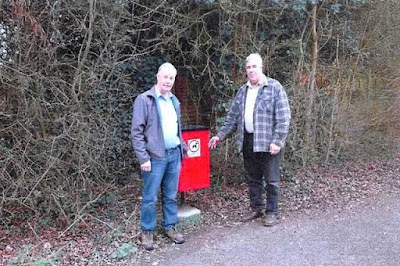 Cllr Granger said: “We are hands-on at this council - it saves us money. I put special locking bolts on the bins but it hasn’t stopped them.” The matter has been reported to the police but the perpetrator remains a mystery. Cllr Granger suspects it is a local resident who objects to the bin being placed in proximity to their property. “We have put 27 bins around the village and we do consult people about where they should go and if someone requests one we canvass all the neighbours.

“We do have a big problem with dog muck though, it’s a real issue. But I think we have come to the conclusion if people don’t like the bins where they are they get rid of them. They do smell and obviously people don’t care for that.” Cllr Williams added: “I can’t imagine why anyone would want to steal a bin, you just would not want to touch it. All it is doing is making the fouling problem worse which is unpleasant and unsafe.”
Posted by arbroath at 6:01 am
Email ThisBlogThis!Share to TwitterShare to Facebook