A man bitten on the leg by a snake while urinating outside was driven to safety and treated by paramedics on the back of a pick-up truck. Gary Peters, 53, was enjoying some cold beers on Wednesday night at the Gregory Downs Hotel in northwest Queensland, Australia, where he also works, roughly 300km north of Mount Isa, when he walked outside to 'take a leak' in some bushes. 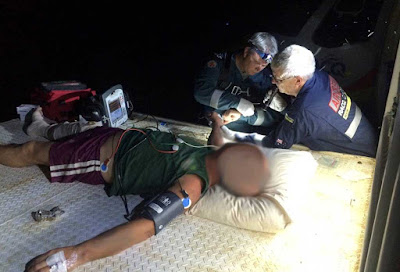 But, instead, he got a nasty surprise. "He came back in with a tea towel wrapped around his leg and then told everyone he'd been bitten by a snake," fellow pub worker Peta Warden said. Following the strike, believed to be from a poisonous mulga, quick-thinking friends fashioned a splint and began bandaging.

"It was hard to tell just how he was, he'd had a bit to drink, so it was a mixture of alcohol and venom," Ms Warden said. But when Mr Peters started to fall in and out of consciousness, friends hoisted him onto the back of a pick-up truck and drove 2km to the nearest airstrip. Once there he was treated by RACQ Careflight paramedics, who praised locals for correctly applying first aid. 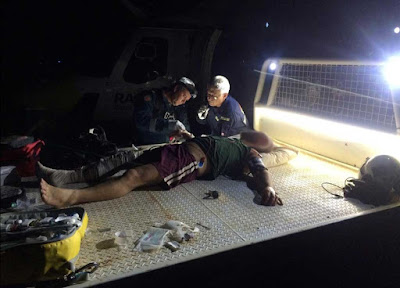 "I'd only just started working at the pub 10 months prior, it's the first time I'd seen anything like it," Ms Warden said. Remarkably, it was Mr Peters' second unfortunate encounter with a snake, after also being bitten in Proserpine last year. The hotel is the only pub in the town of Gregory, which has a population of just 40. He was flown to Mt Isa Hospital and is in a stable condition.
Posted by arbroath at 6:05 am
Email ThisBlogThis!Share to TwitterShare to Facebook

Drinking Ripple would have killed the venom.