A group of children formed a human arrow to point a police helicopter in the direction of two suspected burglars on the run. Around 30 children and adults were taking part in an Easter egg hunt in Capel, Surrey, on Good Friday when they became aware of the National Police Air Service (NPAS) helicopter circling overhead. 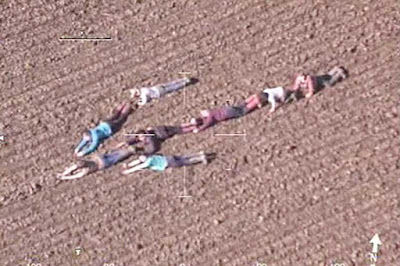 The helicopter, from the Redhill base, had been called by Surrey Police following a report of intruders at a disused building in the village. The quick-thinking group laid in the middle of a ploughed field, forming an arrow to point the helicopter in the right direction of the suspects. The helicopter crew were then able to quickly relay this information to officers on the ground and a short time later two men were arrested.

NPAS Sergeant Paul Sochon said: “I’m sure the last thing the group of daring Capel residents expected when they set out on Friday afternoon was to abandon their Easter egg hunt to assist us in a police search but the initiative they demonstrated proved to be invaluable. The swift action taken by the group of parents and their children was the sort of thing you would usually associate with an Enid Blyton adventure but their ingenuity proved a great help for our crews," he said.

“As a thank you for their efforts the NPAS crew landed nearby to thank the children for the role they played in the incident and they even shared a few chocolate treats with the team which was an added bonus after a busy shift.” A 28-year-old man and a 27-year-old man were arrested on suspicion of burglary in connection with the incident. Both men have been released on bail until Friday, May 13.
Posted by arbroath at 6:00 am
Email ThisBlogThis!Share to TwitterShare to Facebook