A pub's parrot was discovered dead clutching a pork scratching in his claw. Charlie, the African Grey parrot, had lived at The Rising Sun in Kemsing, Kent, for more than 40 years. Landlady of the pub Michelle Hunter said: "I have been with Charlie for the best part of 23 years. "So it's such a shame he's gone. The pub doesn't feel the same without him."No one knows how old he was, but Mrs Hunter believes he was well into his forties, if not older. 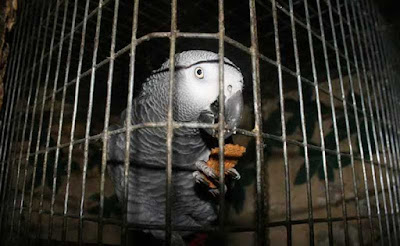 African Greys can live for up to 80 years. She inherited Charlie as part of the pub when she took over with her late husband Peter in 1993, but it is believed the parrot moved in alongside the previous owner in 1973. "We didn't know we'd get the parrot as well as the pub when we moved in. We knew it was there, but didn't realise it hadn't left with the previous owner," she added. "He was listed as an item in the inventory.

"It said: 'One African Grey parrot, complete with cage', and then in brackets afterwards, 'not stuffed'." And it appears over the years he had become part of the furniture. Sat right by the bar, Charlie would greet customers with a "hello" as they walked into the pub, in a different voice every time. "He will be missed," said Mrs Hunter, "When customers come in now they ask, 'Where's Charlie?'" But spending all his time in the pub bred unhealthy habits, and they probably took their toll on the feathered friend. 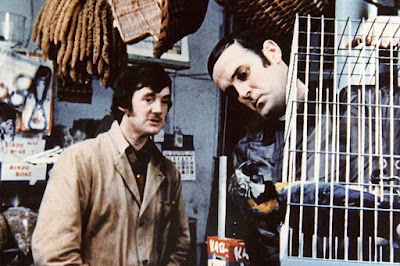 Mrs Hunter said: "He did all the things which were bad for him. His favourite foods were cashew nuts and pork scratchings, which makes sense when he lived in a pub, I suppose. I found him lying in the bottom of his cage, holding a pork scratching. So he must have been happy at the time he died, as he was eating away." In spite of punters mourning his absence, Mrs Hunter said there will not be a replacement pub parrot. "There's only one Charlie," she said.
Posted by arbroath at 6:01 am
Email ThisBlogThis!Share to TwitterShare to Facebook

Deep fried pork skin/fat.
Usually called Pork Rinds in the US, although in the South, they may be called "Cracklin's."
In Mexico, they are called chicharron.
They are a great bar snack, especially with a few drops of Tabasco sauce on them.

Thanks! I know what pork rinds are, but had never heard of pork scratchings.

But can parrots eat them safely?

But can parrots eat them safely?

I think the most important thing about these pork rinds as we call them is that they are pretty high in fat and contain salt. Both are bad for us and bad for parrots. But, I give my macaws just like a 1/2 inch of one when I'm eating them so they can share in the crunching fun. I wouldn't give them any more than that. I only do this every few days at most.