Several people were taken to hospital after a suspected mechanical malfunction sent a whale-watching ship ploughing into a San Diego pier while docking. The ship's bow suffered significant damage when it rammed the harbour wall, smashing a portion of the brick walkway. 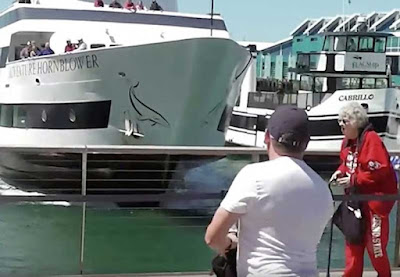 Officials say a mechanical malfunction apparently prevented the ship from stopping in time. The video shows an onlooker warning an elderly woman who was in the looming boat's path, apparently oblivious to its blaring horn. New Jersey tourist Osmond DeSousa, who was on the top deck of the boat with his wife and teenage son, said: "I saw it coming in fast. 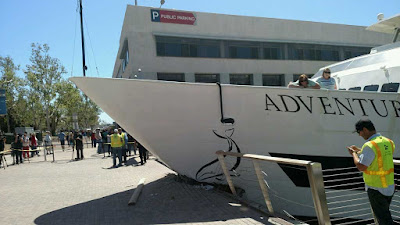 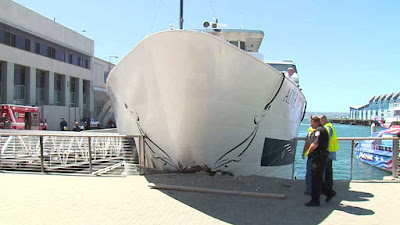 "It hit the dock, bounced off and continued too fast to stop. The woman next to me fell, she was hurt pretty bad. The crew were walking on the deck yelling, 'Brace yourselves or hold on to something.'" The accident involving the 150ft Adventure Hornblower happened on Thursday in the city's Embarcadero tourism area.

Three of those hurt were taken to hospitals with neck, back or leg injuries, said the San Diego Fire-Rescue Department. None of the injuries were life-threatening. It's not clear how many people were aboard. A tugboat was later sent to pull the vessel away from the pier. Local authorities have launched an investigation.
Posted by arbroath at 6:05 am
Email ThisBlogThis!Share to TwitterShare to Facebook

Nice Post. I have been reading here for about an hour. I am a newbie and your success is very much an inspiration for me. If you want to Change Spectrum Email Password please contact our team for instant help.