Tidy intruder broke into gym to work out

A man was willing to risk jail time, just to spend a night alone inside a gym according to the facility's owner. "The police had never heard of anyone breaking into a gym just to work out for the evening," said Cheryl Schneider, the owner of No More Excuses Fitness in Edmonton, Alberta, Canada, said. Schneider walked into the studio for her Monday morning class to find traces of an intruder. The main breaker had been tripped, and the security alarms deactivated. Someone had picked the lock on the back door, and made their way inside overnight, Schneider said. But it soon became clear, this wasn't a typical break-and-enter. Pricey gym equipment and office computers were untouched. 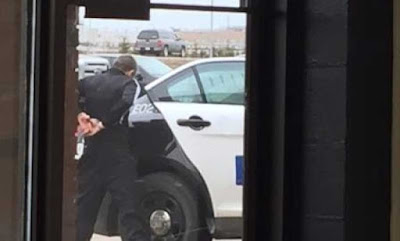 The only items missing were a T-shirt branded with the gym's logo, an agility ladder and a step counter. Mud-caked construction boots had been placed carefully outside the front door, men's work overalls were folded in the foyer. Equipment had been moved around, and a cardboard cutout of Jon Bon Jovi, which the gym displays as a mascot of sorts, had been moved across the room - and turned to face a wall. "He certainly kept it very clean, just moving different things, putting things into very neat piles" ... "It was a very bizarre scene," Schneider said. She found a pair of cycling shoes and a water bottle by the spin area. And the microphone used for fitness classes was out. To her, it seems he made himself "right at home." 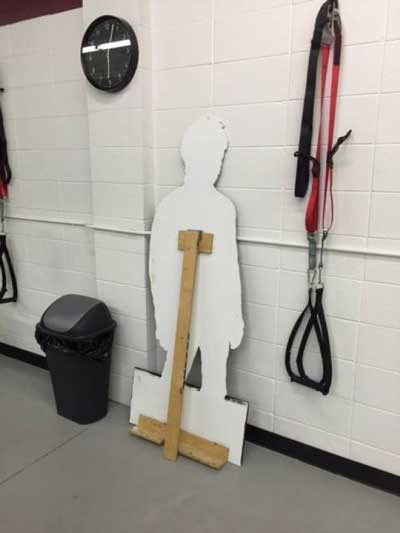 After his work-out, the bandit appears to have used one of the gym's signature mint-scented towels to wipe down, placed it in the laundry basket, and refuelled with a chicken wrap from Tim Horton's, carefully dusting the crumbs and wrapper into the wastebasket. "It was very strange," said Schneider. "I think it was drug-induced." Within two hours, Schneider was showing a police officer around the ever-so-neatly stacked studio equipment and supplies that the burglar had left behind. As they made their way to the back of the studio, Schneider turned around to find her uninvited guest had returned. "I look up and there he is, inside the studio, behind the door, and of course I screamed and thought: 'Holy crap! How did he get back in?' ... everything was locked as we were showing the police around, so either he had broken in again or had been hiding the whole time."

The intruder was wearing ladies gym wear that he appeared to have rummaged out of the gym's lost and found bin. Schneider thinks he came back to retrieve his work clothes. She said the intruder was calm and cooperative as police handcuffed him and escorted him through the gym, to a police car waiting outside. But wouldn't leave before wiping his feet on the mat, so he wouldn't sully the studio floor. "The police officer was shaking his head, just saying 'this is crazy.'" Schneider says charges are pending against the gym interloper. She's since beefed up security at the gym, replacing the locks and adding new deadbolts to all the doors. And despite the hassle, Schneider says she has has to give the intruder some credit for good manners, and a dogged determination to get fit. "I've never heard of someone breaking in to work out at a studio. I guess we must be pretty good," Schneider said.
Posted by arbroath at 6:05 am
Email ThisBlogThis!Share to TwitterShare to Facebook