Police in Western Australia have charged a suspended driver after he allegedly had cartons of beer buckled into a car seat while children were unrestrained in the foot wells.

Officers said they made the discovery on Wednesday during a traffic patrol of the Great Northern Highway near Broome. Police said several children, including a baby less than a year old, were lying on the laps of adults and in foot wells while cartons of Emu Export and Victoria Bitter were securely strapped in. 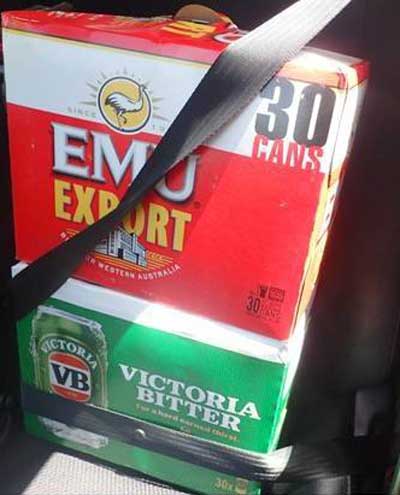 Two other adults in the car were also wearing seatbelts. A 27-year-old man has been charged with no authority to drive and failure to restrain a child. Kimberley District Superintendent Allan Adam said he was not surprised by the incident. "We do have problems up here in the Kimberley," he said. "

It shows some of the attitudes of some of our road users in the way they see their priorities. "We are doing our best to stamp it out through enforcement but we are also about to embark on public education, which is obviously needed in remote communities."
Posted by arbroath at 6:04 am
Email ThisBlogThis!Share to TwitterShare to Facebook