Under-cover burglar who disguised himself with duvet hunted by police

A thief in New zealand tried to disguise himself under a child's duvet as he crawled around a house stealing cash and jewellery. Counties Manukau police are calling for any information on the man who was caught on CCTV on Sunday, March 20, from a Dannemora property, in East Auckland in broad daylight. 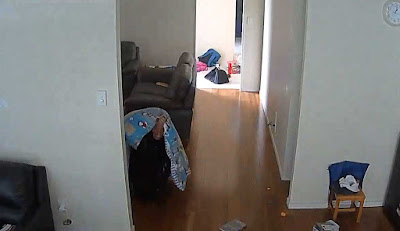 The man broke in through an unsecured bedroom window about midday and spent 10 minutes in the family home. He grabbed a duvet to hide him while he rummaged through drawers, stealing a significant amount of cash, jewellery and a camera. He unsuccessfully tried to take a TV mounted from the wall. 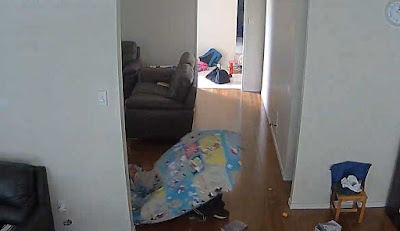 "I'm hoping someone will recognise him. Especially when he looks up at the camera smiling. It's sort of unusual that he is smiling up at the camera. Our message is that while it can appear amusing, someone has been victimised by this and been traumatised by someone coming into their house."

You can watch the video footage here.
Posted by arbroath at 6:04 am
Email ThisBlogThis!Share to TwitterShare to Facebook