A man who was involved in a solo SUV crash was struck by a bus after getting out of the vehicle, which was left dangling on the edge of the road.

The crash was reported on Malibu Canyon Road in Los Angeles, California, at about 4:40pm on Saturday. 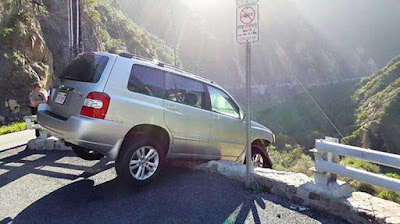 The SUV’s front end smashed through a guardrail and was dangling over the edge of the road. The disoriented driver was then struck by a passing bus after he climbed out the vehicle.

The man hit by the bus was taken to a hospital, but his injuries are not believed to be life-threatening,. Fire units then cleared the scene and the road, which had been closed in both directions, was reopened soon after.
Posted by arbroath at 6:05 am
Email ThisBlogThis!Share to TwitterShare to Facebook

I can't decide if this is the luckiest SOB in the world, or the unluckiest.

Either way, I'm sure he's had better days.

How many people live through being hit by a bus?