A 41-woman and her 31-year-old brother were both arrested by Florida Highway Patrol troopers and charged with DUI on Friday morning.

Officials said they received a bulletin to be on the lookout for a reckless driver travelling southbound on Interstate 75 near Ocala. A trooper spotted the vehicle and was able to stop it. 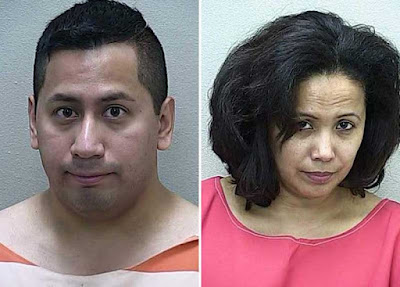 While talking with the driver, later identified as Josue Moncada, the trooper detected alcohol and arrested him on a DUI charge at 2:55am. Minutes later, Moncada's sister, Ercilia Moncada, arrived at the incident location and argued with the trooper about why he was arresting her brother.

Another trooper was called to the location and while talking with her, found her to be impaired. She was also arrested on a DUI charge at 3:18am and placed in a second trooper's cruiser. The first trooper left the scene to take Moncada's brother to the Marion County Jail, leaving the second trooper and the woman behind. The woman, who was handcuffed, managed to escape, but was later captured.
Posted by arbroath at 6:07 am
Email ThisBlogThis!Share to TwitterShare to Facebook