A woman who slipped on a mossy footpath was told to wear socks over her shoes, a councillor in Timaru&lt, New Zealand, says. Timaru District councillor Steve Wills says the local woman recently skidded on a mossy, frosty footpath.

When she complained, council staff told her "to put her socks on outside her shoes", Wills told a recent district services committee. He believed more attention could be paid to maintenance, including in the footpaths policy councillors were debating. 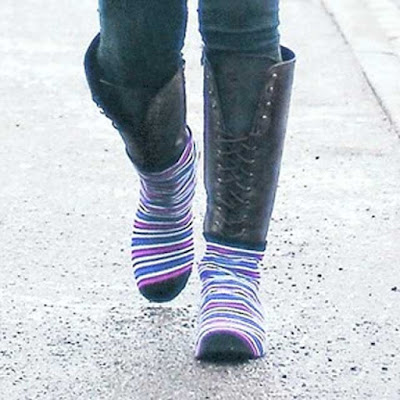 Sweeping the footpath with a wire broom could be arranged for such "one-off" circumstances, Harper said. The council's use of hotmix for footpath resurfacing made them smooth for trundlers and mobility scooters, but moss could be a problem. "There is no real answer to the issue," Harper said.
Posted by arbroath at 6:04 am
Email ThisBlogThis!Share to TwitterShare to Facebook

You can manage to get a picture of anything. I'm amazed.

You are indeed amazing.