A novice cyclist ended up riding 18 miles after getting inadvertently caught up in a triathlon. Alison Carrick, 55, had set out for a leisurely ride as part of her plan to get back in the saddle, having not ridden a bike in years. But instead of the straightforward cycle she was expecting, the mother-of-three ended up riding almost 20 miles as she was swept along with 250 riders taking part in the Rossendale Triathlon. Alison, from Haslingden, Lancashire, said after inadvertently joining the 21km ride near the start at Marl Pits Leisure Centre, she decided to go with the flow and ‘stick it out’. She said: “I didn’t have a clue what was happening at the start. I realised it was a triathlon when I saw wet cyclists with numbers on their backs. I thought ‘Oh my goodness’, what does this mean for me. I just didn’t realise we were taking the same route. 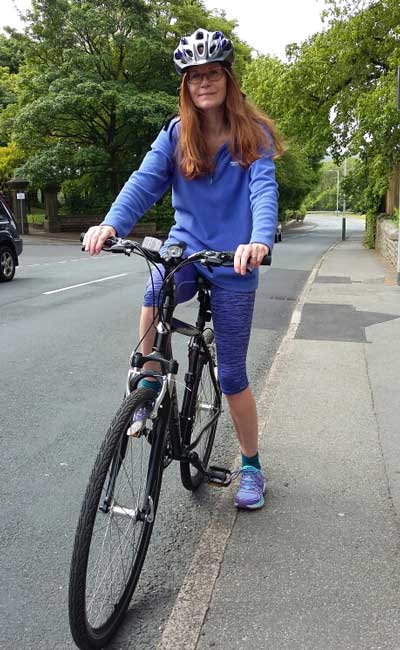 “I should have stopped and made my way back but I just felt like I had to keep going. I kept thinking it can’t be that much further. I don’t think I realised how far the cycling part of it actually was.” Alison added: “I have only been cycling for a fortnight so my fitness levels are not great. I was hardly up for a triathlon but I got caught up exactly the moment they started. It felt like I couldn’t get off it, I ended up cycling about 18 miles.” Despite Alison riding a hybrid second hand bike, which she had haggled down to just £200, and pedalling considerably slower than the triathletes, the spectators started cheering her on. They even encouraged her to keep going when she attempted to stop and get out of the race. Alison, who works as a teacher at Greenhill Primary School in Bury, and specialises in English and History, said: “The experience was amazing, people were all cheering me on.

“I wasn’t pretending to be part of it, I didn’t have any of the right gear but people were encouraging me to keep going when I got off and pushed the bike. The stewards kept directing me where to go. At the time I felt like I should have a basket on the front with a baguette in it, I was going that slow. I couldn’t stop because the cyclists were whizzing past, they were all going about 40 miles an hour on the downhill, they were coming past me so often and so fast it was terrifying. I had my brakes on all the way!” When Alison finally returned home after nearly three hours, her husband Ian and children Megan, Joe and Ellie, could not help but see the funny side to her predicament. Alison said: “I don’t know how I got home, my legs were cycling for me. When I got back I just fell to pieces. My family just said, you’ve been gone a long time but they weren’t worried. 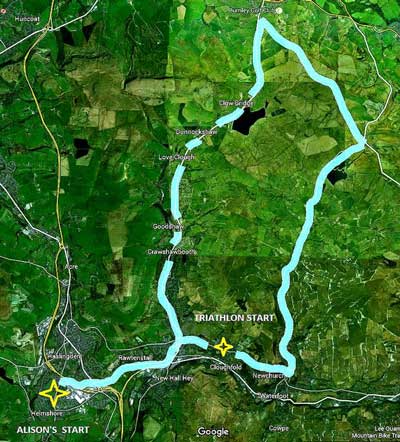 “They thought the whole thing was hilarious, and that it could only happen to me. I’m known for getting myself into odd situations.” Alison concluded it was just “one of those weird things that happens.” She said: “Once you get caught up in something like that you can’t stop. I have not cycled for a long, long time, I’d only thought I was going to do five or six miles. Now I know I can do 18! I have not been able to get back on the bike since because my legs are like jelly. But now I want to be somewhere near as fit as some of those cyclists that shot past me.” Organisers believe Alison is the first ‘non-competitor’ to have ever taken part in the Rossendale triathlon race. Organiser Graeme Courtney said: “I don’t think this has happened before, not that I know of. People have the official kit and number on so you know they’re in the race, she must have just got sucked into it.” He has encouraged her to enter next year’s race proper.
Posted by arbroath at 6:01 am
Email ThisBlogThis!Share to TwitterShare to Facebook