The police have been criticised for their decision to prosecute a group of friends who staged a Christmas prank in Eastbourne town centre. Five police cars turned up and they were hauled before the courts and convicted over the publicity stunt. They had staged a kidnapping of Santa, bundling him into the back of a BMW last December. Jamie Rainsley, 22, from Eastbourne, staged the stunt with five colleagues to promote his company. The pranksters stopped outside the Arndale Centre before Jamie and a friend jumped out and bundled Santa Claus, who was involved in the hoax, into the back of the BMW before driving off on December 18. 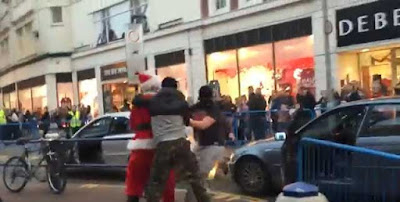 All six admitted using threatening or abusive behaviour likely to cause harassment, alarm or distress and each received a 12-month conditional discharge and ordered to pay £100. Jamie launched a fierce attack on Sussex Police for proceeding with the legal action. He said: “We are not criminals, we are six young people trying to make careers, and now because of the actions of Sussex Police we have criminal records. That is not fair, that is not justice. It was surely clear to everyone it was a stunt. We threw around 150 wristbands out of the two vehicles and we know for a fact that shoppers stopped and picked them up. 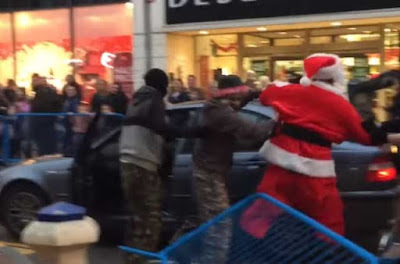 “It was never our intention to upset or offend anyone, it was just a prank. Little did we know that people were going to dial 999.” Roger Thomas, a former chairman of East Sussex County Council and now a Wealden District Councillor for Heathfield, said: “I am appalled that Sussex Police have acted in such a silly way. There was absolutely no need for it to have gone that far. The young people may well feel on reflection that they should have warned the police what they were going to do, but they are young people and they can sometimes make mistakes. It seems to me that Sussex Police have got their priorities completely wrong.

“I call on the Sussex police and crime commissioner Katy Bourne to personally step in, and tell the chief constable Giles York that such behaviour from the police is completely unacceptable. It is not fair that these talented young people now have criminal records.” Sergeant Ed Ripley said: “Due to the impact on the public who were attending the event it was considered to be in the public interest to prosecute this offence. The incident which was staged caused alarm and distress to spectators. Unfortunately, the impact of their actions was not considered by any of the people involved and this really affected members of the public, some of whom came forward to provide statements to police to describe how it had affected them. There were a number of families who witnessed the stunt and some children are still unsettled by what they witnessed.”
Posted by arbroath at 6:00 am
Email ThisBlogThis!Share to TwitterShare to Facebook