Driver stopped by police for having no windows

A motorist found a unique way to keep cool during the current heatwave.

Instead of winding down their windows, they drove around in a car without any windows at all. 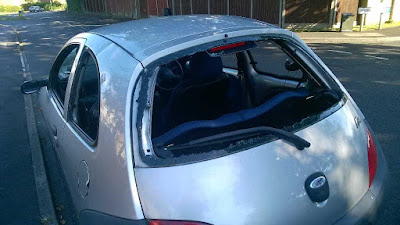 The silver Ford KA was stopped by police in Bedford on Monday, after officers spotted its windows were completely smashed.

After pulling the car over, they found the driver also had no licence or insurance. This resulted in officers seizing the vehicle at the roadside.
Posted by arbroath at 6:02 am
Email ThisBlogThis!Share to TwitterShare to Facebook

Is there a law saying it has to have windows other than a windshield?

Mind you, I'm sure there are lots of other laws that could be 'tweaked' in order to make it illegal.

I've got a vague recollection that a rally driving pal of mine in Northern Ireland managed to pass his MOT by removing the plexiglass windows (which whilst installed to be light, were deemed unsafe) but leaving his windscreen in place. So no windows is fine, just so long as you've got a windscreen.