Workers at Fiumicino Airport in Rome, Italy, were forced to push a passenger jet out onto the runway on Sunday, after a technical problem stopped it from taking off. 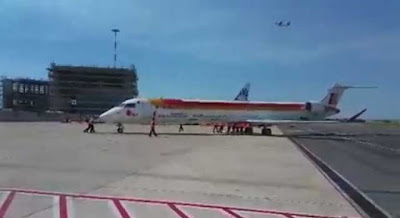 The incident involved a 90-seater Iberian Airlines, Bombardier CRJ900 series passenger jet bound for the port of Vigo in Spain. The plane was scheduled to depart at 3.10pm. 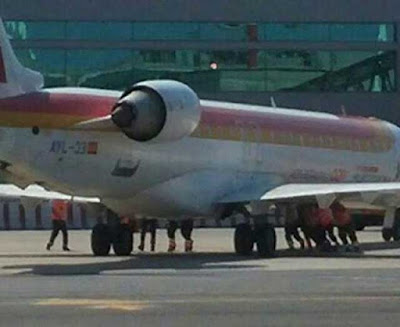 After more than hour on the ground, the pilot finally got the go-ahead from air traffic control to request a push from 11 members of airport staff, who rolled up their sleeves to help get the plane on its way. It was no easy feat, fully loaded with passengers and luggage, a CRJ900 jet can weigh up to 36 tonnes. The plane eventually took off at 4.30pm.
Posted by arbroath at 6:03 am
Email ThisBlogThis!Share to TwitterShare to Facebook