Residents were rudely woken in the night by a ‘giant badger’ with a taste for waste.

The dextrous creature was seen flicking open latches on wheelie bins in a village near Stroud, Gloucestershire, after pulling them over, and helping themself to the bounty inside. “I could not believe my eyes when I saw what was happening,” said one Chalford resident, who saw the creature strike. 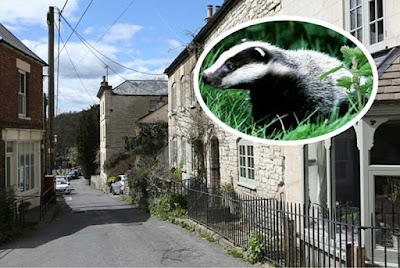 “The kerfuffle outside woke me up just as it was getting light. I expected it to be a fox causing all that noise but it appeared to be a giant badger - the biggest I have seen. It was reaching up on to the top of the bin and pulling it over and opening the latch.”

She said Chalford High Street was littered with waste which she and neighbours cleared up. The average weight for badgers in the UK is between 7.5 and 9.5kg for females and 8.5 and 10.5kg for males. The heaviest badger found in the UK was a 27.7 kg boar.
Posted by arbroath at 6:01 am
Email ThisBlogThis!Share to TwitterShare to Facebook

I've been feeding badgers in my garden for 5 yrs now, last night we had 4, my neighbours aren't impressed when they start upturning the food waste caddies and it gets split all over the road.
Bought song floral disinfectant and put it in a spray bottle and i douse mine and my neighbours caddies with strong spray, it keeps them off for a few days.

Good luck with that!