A woman from Blenheim, New Zealand, who drove to the police station to let officers know she was too drunk to drive thought she was doing the right thing. Amanda Jane Boyd, 50, of Witherlea, was heavily intoxicated when she arrived at the Blenheim Police Station at about 2pm on June 14. She told police officers at the front desk she needed to get to Christchurch but was too drunk to drive there, and asked if they could arrange to get her there. They asked how she got to the station, and Boyd pointed to her car and said she drove, but could not drive any further because she was too drunk.

Police breath tested Boyd who gave a reading of 1395 micrograms of alcohol per litre of breath. The legal limit is 250mcg. In explanation, Boyd said she thought she was doing the right thing by not driving to Christchurch, and instead just driving a short distance to the police station to get help. She had been caught drink-driving twice before, once in 2008 and once in 2010. 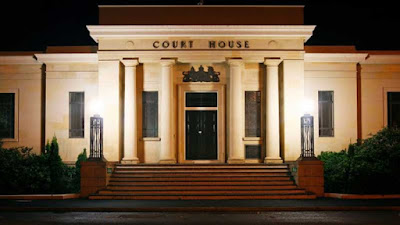 Boyd appeared at the Blenheim District Court on Monday charged with drink-driving for the third or subsequent time. Judge David Ruth said Boyd had a serious problem with alcohol. "It was an exceptionally high amount of alcohol in your system, however it's not the highest you've had." He convicted Boyd and remanded her on bail to August 22 for sentencing, so a pre-sentencing report could be submitted.
Posted by arbroath at 6:05 am
Email ThisBlogThis!Share to TwitterShare to Facebook

And good grief, at 4x the limit, I'm surprised she was still standing.