Man apologises for stealing and crashing both his grandfather's cars

A grandson has made a public apology to his grandfather after twice taking his cars without consent - and crashing both times. Dean Bates, 27, took his grandad Peter’s Vauxhall Insignia after a family row and crashed into another vehicle, writing it off, and injuring the other driver. Then he went back home to take Peter’s second car, a Ford Focus, before going missing for three days - and then knocking a policewoman off her motor bike while leaving his hotel bolthole. Now Dean of Winlaton, Gateshead, Tyne and Wear, wants to apologise to Peter, who helped bring him up, for the upset he has caused. 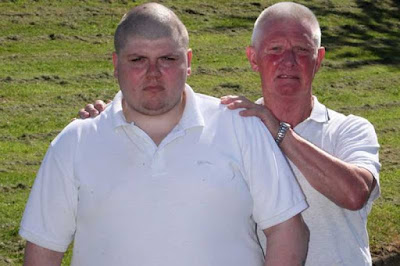 There was no serious damage in the second incident but the policewoman was slightly injured. Dean has now said he wants to apologise to his grandad. He said: “I love my grandad but I did not know what I was thinking when I took the cars. There was an argument in the morning and I took the car. It was just a one-off. I don’t know what I was thinking but I know I caused a lot of problems for him, the other driver, and the policewoman. I was playing with the radio, turned left at a roundabout, and crashed into someone. The woman driver of the car I crashed into broke her hand and her car was a write-off. Afterwards I drove back home, picked up the other car, and went to a hotel for three days while my family were looking for me.

“I thought I was going to get sent straight to jail. I was all over the place and didn’t know what was going through my head. That’s when I had the second crash after driving into the policewoman’s motorbike. I feel guilty but I don’t know what to do to put it right. I am really sorry.” Dean, who has lost his job since the incident, was charged with two counts of aggravated vehicle taking and causing injury and two counts of using a motor vehicle on a road without third party insurance. He was sentenced to 12 weeks imprisonment, suspended for 18 months, when he appeared at Gateshead Magistrates’ Court. He was also ordered to receive alcohol treatment for nine months and was disqualified from driving for a year. 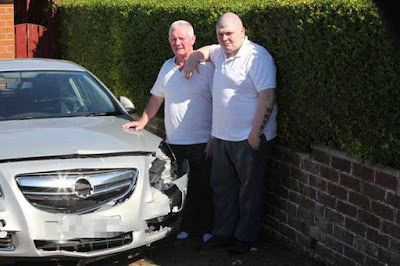 Peter, 68, said: “I forgive Dean because he has paid the price for what he did. But it has caused problems with the insurance company who cancelled the policy and said they will not meet a claim for repairs to my car.” He said the Vauxhall Insignia will take £4,500 to put right and he does not know where the money is going to come from. Insurance company Markerstudy Group said a clause in the policy meant they were not responsible for “taking away incidents” where the car was taken by a member of the household or member of the family in a close personal relationship with the policyholder. Because Dean has lived with Peter since the age of 15 they said they were unable to deal with the claim. Peter appealed, claiming the policy wording was ambiguous, but they said they would not uphold the appeal.
Posted by arbroath at 6:00 am
Email ThisBlogThis!Share to TwitterShare to Facebook

His grandson has not paid the price until he, literally, pays for the damage to the vehicles. Isn't the guy a little old to be having temper tantrums?

What Shak said. The guy is 27? He's too old to pull a stunt like that, and old enough to get a job and pay his grandfather every cent.