A restaurant owner has spoken of his shock after a customer accidentally paid more than £1million for a three-course meal. Onwer Abdul Wahid said the man, who did not want to be named, was having the meal with two friends at the Rajpoot Indian Restaurant in Inverurie, Aberdeenshire, Scotland. 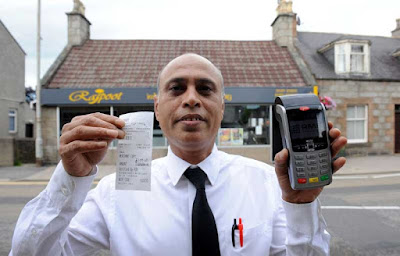 The bill for the three-course mean and drinks should have come to around £100 but after paying by credit card, Mr Wahid realised a payment of £1,006,082.04 had been authorised by his bank. Mr Wahid, 51, said: “When he came to pay I gave him the card machine and he asked to put in the amount himself but it didn’t go through.

“I then had to phone the bank for him and I answered all of the questions and they then gave me the confirmation code. At this time he still had the card machine so I never saw the amount he had typed in. But 10 minutes later I took the machine and looked at it and I just said ‘oh my god what’s happened, what have you done my friend’.

“I looked at the receipt and then he looked at it and he just said ‘oh my …’ He then rang his bank up to say it was the wrong amount and cancel it before paying the correct amount.” He added: “This has to be one of the most expensive meals there has ever been. I have never experienced anything like this. It was really, really shocking. I still can’t believe it.”
Posted by arbroath at 6:01 am
Email ThisBlogThis!Share to TwitterShare to Facebook