Man tells of unusual attack while stuck in traffic jam

A man says he is left stunned after a terrifying ordeal on an expressway in Michigan on Saturday. 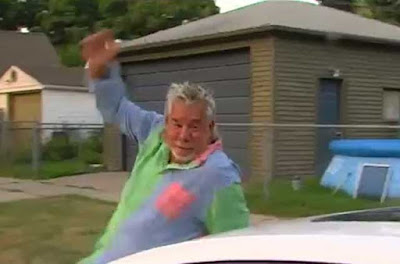 Michael Mengis, of Oak Park, said he was driving with his son along I-94 near the I-96 interchange when they came to a complete halt due to heavy traffic. He said a man jumped out of his Jaguar car and onto the hood of his Dodge Dart.

Then, the attacker pulled out a knife and started using it to hit the driver’s side window. He was unable to break to break the glass. “Thank God Dodge builds a good window,” said Mengis. He said the man struck his car eight or nine times.

While the story is serious, Mr Mengis' account of the incident has some comedy elements.

It is not clear if then stranger intended to carjack the victims. Once traffic picked up, Mengis says he sped away and called Michigan State Police. Mengis wants to warn other drivers about his attack.
Posted by arbroath at 6:07 am
Email ThisBlogThis!Share to TwitterShare to Facebook

Certified in marshall arts ! Yeah, right, what, 30 years ago, Fatty ?

Good thing jag-dude didn't know where to hit
Also, learn where to hit a window if you need to free a dog or kid in a warm car. It's easy if you know what you are doing

Fury road and Max is Mad