A volunteer group leader made sure a pond clean up went ahead when he set up his desk in the water. Chris Lowe, who runs the Friends of Queen's Park volunteer clear up sessions in Brighton, East Sussex, is the group's only leader qualified to look after volunteers but a painful foot condition had left him struggling to stand. 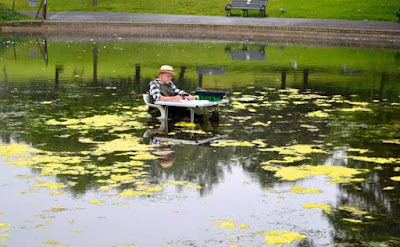 When the pain persisted, rather than cancel the 73-year-old decided to set up a seat in the pond and take his desk with him, giving him a chance to get through some paperwork at the same time. Mr Lowe, who commands dozens of volunteer sessions every year in the park, said he had already been forced to cancel one session and did not want it to happen again. He said: "I was loathed to cancel yet another session and delay the annual cleaning of the pond yet again but I am the only leader and my foot was still hurting.

"It occurred to me that I did not actually need to stand up to lead the session, but I had to be at close range in the pond to oversee the volunteers for health and safety reasons. So I decided to make the most of it and bring along a desk so I could get through some paperwork at the same time. In short, no volunteer leaders equals no volunteers groups, which means our parks go down the pan. It took a group of five volunteers several hours to clear the pond, and now the water looks clear, healthier for wildlife and safer for toddlers. It is the cleanest it has ever been." 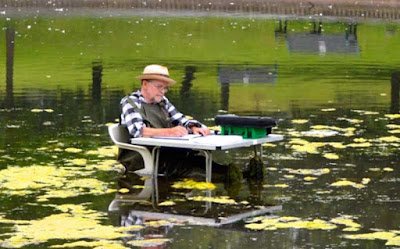 He hopes his approach highlights the need for more volunteer leaders in the group, and for others across the city, particularly as more volunteers are being asked to fill the gap in the wake of job cuts to make savings at Brighton and Hove City Council. He said: "It is a bigger commitment but if we had three leaders we could share the responsibility and it could mean volunteer sessions are never cancelled, we do need them. We would also welcome more volunteers, some people are not keen because it is hard work and a bit mucky but it is rewarding."
Posted by arbroath at 6:00 am
Email ThisBlogThis!Share to TwitterShare to Facebook