Anglers on a river in Hampshire are unhappy that so many fish has made catching them has become too easy. Around 60,000 rainbow trout have escaped into the Hampshire Avon leaving fishermen frustrated and fed up at the sheer number in the water. Their bait that is intended to outsmart wily coarse fish like chub and perch over several patient hours is being easily gobbled up by the gullible farmed trout. One angler caught 52 of the farmed fish in a single morning, with 20 from consecutive casts. The trout are believed to have escaped from a local fish farm. 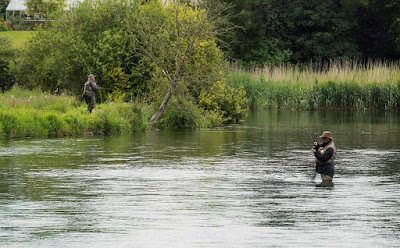 Because they are a non-native species, anyone who unintentionally catches one is not allowed to return it to the waterway and end up taking it home. The Environment Agency has previously stepped in to remove alien fish from waterways but it is thought the trout have spread for several miles up and down the Avon at Fordingbridge that it is impossible to recover them. Instead officials have advised members of Christchurch Angling Club to hook out as many trout as possible in a bid to resolve the problem. The agency is investigating where the fish have escaped from and has not ruled out prosecution.

Andy Walker, of Christchurch Angling Club, whose 900 members use the Avon, said: “There are so many of them that anglers can’t get through to the traditional target species they want to catch like chub and barbel. Rainbow trout are a non-native species that eat small fry of indigenous fish so it is a bit worrying. The trout have spread a few miles in either direction and there is not a lot the Environment Agency can now do. Hopefully they will all be caught before they start to breed. Spawning time is next spring so there is 10 months to catch them all.” Angler Andy Brown caught 52 of the trout in the space of a few hours. 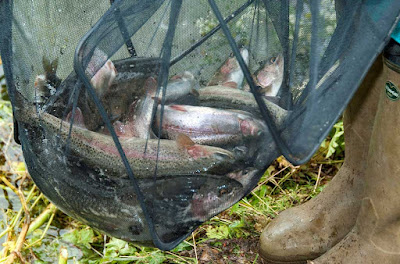 He said: “I’m not a huge lover of trout so I gave them to my neighbours and my cats have had a few good dinners. We have been told there is possibly in the region of 60,000 of them. Anglers have been catching them left, right and centre. We have been told to catch as many as we can for the good of the river.” A spokesman for the Environment Agency confirmed it was investigating where the trout have come from. He said: “We are currently investigating the presence of these rainbow trout populations in the Hampshire Avon. We would like any anglers fishing the Hampshire Avon to report any captures of rainbow trout with details of the number caught, date, location, size of fish, pictures (if possible) and the amount of hours fished. Anglers should not release any rainbow trout they catch back into the Hampshire Avon.”
Posted by arbroath at 6:01 am
Email ThisBlogThis!Share to TwitterShare to Facebook